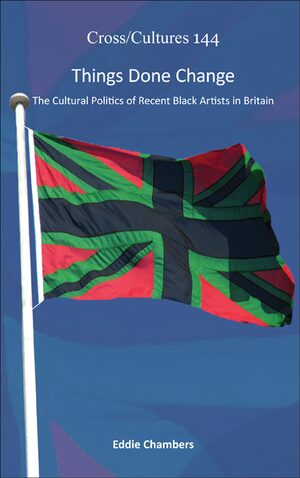 The Cultural Politics of Recent Black Artists in Britain

Author: Eddie Chambers
1980s Britain witnessed the brassy, multifaceted emergence of a new generation of young, Black-British artists. Practitioners such as Sonia Boyce and Keith Piper were exhibited in galleries up and down the country and reviewed approvingly. But as the 1980s generation gradually but noticeably fell out of favour, the 1990s produced an intriguing new type of Black-British artist. Ambitious, media-savvy, successful artists such as Steve McQueen, Chris Ofili, and Yinka Shonibare made extensive use of the Black image (or, at least, images of Black peo¬ple, and visuals evocative of Africa), but did so in ways that set them apart from earlier Black artists. Not only did these artists occupy the curatorial and gallery spaces nominally reserved for a slightly older generation but, with aplomb, audacity, and purpose, they also claimed previously unimaginable new spaces. Their successes dwarfed those of any previous Black artists in Britain. Back-to-back Turner Prize victories, critically acclaimed Fourth Plinth commissions, and no end of adulatory media attention set them apart.
What happened to Black-British artists during the 1990s is the chronicle around which Things Done Change is built. The extraordinary changes that the profile of Black-British artists went through are dis¬cussed in a lively, authoritative, and detailed narrative. In the evolving history of Black-British artists, many factors have played their part. The art world’s turning away from work judged to be overly ‘political’ and ‘issue-based’; the ascendancy of Blair’s New Labour government, determined to locate a bright and friendly type of ‘diversity’ at the heart of its identity; the emergence of the precocious and hegemonic yBa grouping; governmental shenanigans; the tragic murder of Black Londoner Stephen Lawrence – all these factors and many others underpin the telling of this fascinating story.
Things Done Change represents a timely and important contribution to the building of more credible, inclusive, and nuanced art histories. The book avoids treating and discussing Black artists as practitioners wholly separate and distinct from their counterparts. Nor does the book seek to present a rosy and varnished account of Black-British artists. With its multiple references to Black music, in its title, several of its chapter headings, and citations evoked by artists themselves, Things Done Change makes a singular and compelling narrative that reflects, as well as draws on, wider cultural mani¬festations and events in the socio-political arena.
E-Book

€95.00$120.00
​
Add to Cart
Eddie Chambers is a curator and writer of art criticism. He has, since the early 1980s, been involved in the visual arts, particularly the practice of Black-British artists. He holds a PhD from Goldsmiths College, University of London and is an Assistant Professor in the Art History Department of the University of Texas at Austin.
"Accessible and refreshingly clear [...] An important work that lends an unique methodology and well-deserved analysis to a rarely examined trajectory of the recent black artistic practices in England." – Olubukola A. Gbadegesin, Saint Louis University

"Chambers rarely refers to theoretical categories and hardly ever uses academic jargon, but writes an easy, almost colloquial style, accessible also to readers with little knowledge of – but curiosity for – the field. Furthermore, [this book does] not aim at a full and/or balanced account of black art in the UK, but [is a] political [text], and passionately so."– Ingrid von Rosenberg, Technical University of Dresden

Acknowledgements
List of Illustrations
Preliminary Note
Introduction: You were the future once
The only thing to look forward to… is the past
Service to Empire
Chris, Steve, and Yinka: We Run Tings
Coming in From the Cold: Some Black Artists Are Embraced
Everything Crash
Works Cited
Index