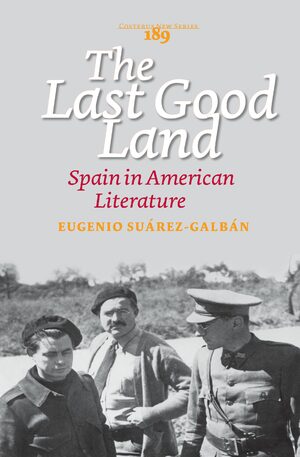 Author: Eugenio Suárez-Galbán
Books studying the presence of Spain in American literature, and the possible influence of Spain and its literature on American authors, are still rare. In 1955 appeared a pioneer work in this field – Stanley T. Williams’ The Spanish Background of American Literature. But that book went no further than W.D. Howells’ Familiar Spanish Travels, published in 1913. The Last Good Land covers most of the twentieth century, including such groups as the Lost Generation and African American writers and exiles. It also considers then recent revolution in Spanish cultural and historical thought introduced by Américo Castro, which several American writers discussed in this volume may be said to have anticipated. Recent studies have expanded on Williams’ volumes, but in the majority of cases these works limit their scope to a single period (the nineteenth century, the Spanish Civil War), a movement (predominantly Romanticism) or authors known for their interest in Spain (Irving, Hemingway). The result is often a lack of continuum, or the exclusion of such authors as Saul Bellow, William Gaddis or Richard Wright. Within American literature itself, The Last Good Land contains revisions of traditional interpretations of certain writers, including Hemingway. The variety of authors treated, both in respect to ethnicity and gender, guarantees a varied and global view of Spanish culture by American writers.
E-Book

€112.00$144.00
​
Add to Cart
"Suárez-Galbán has shown remarkable interpretive skills in many of the chapters (most notably in those on Dos Passos and Bellow). […] Suárez-Galbán’s book will be a most valuable reference. Not only does it provide an intriguing interpretation of the development of an American national identity during the last two centuries as revealed in its literature on Spanish topics; it also broadens the critical framework in which Spanish culture and letters can be construed. In sum, it opens many doors to a fruitful expansion of transatlantic studies." – Luis Alvarez-Castro, University of Florida, in: Comprative Literature Studies 51.4 (2014) pp. 683-6
Preface
Spain and the United States within the Western Tradition
The Pioneers: Washington Irving and Henry Wadsworth Longfellow
From Romantic Idealization to Realistic Ambiguity, or from the Civil War to the Cuban War
W.D. Howells: The Future that Never Became a Present
Santayana, or the Existential Confirmation of Stereotypes
The Autobiography of Alice B. Toklas: The Lost Generation Rediscovers Spain
John Dos Passos: Rosinante’s Winding Road to the Right
Virgin Spain: Jewish-American Travel Literature
Hemingway: Stories of the Last Good Land
Two Women at War: Lillian Hellman and Josephine Herbst
Spain is Beautiful: Claude McKay and Langston Hughes Dream Heaven
Saul Bellow’s “The Gonzaga Manuscripts”: Spain is Europe
Not So Good, but Still Good: William Gaddis, Chester Himes, Nelson Algren
Pagan Spain: Ethnicity and Religion in Richard Wright
Spain as Autobiography: Barbara Probst Solomon
Conclusion
Bibliography
Index