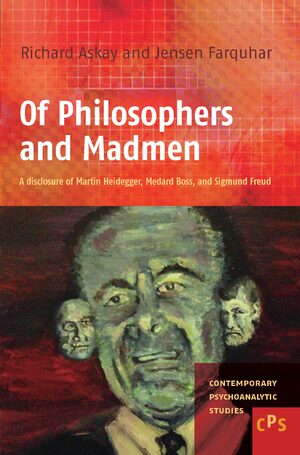 Of Philosophers and Madmen

A disclosure of Martin Heidegger, Medard Boss, and Sigmund Freud

Authors: Richard Askay and M.J. Farquhar
This text is an innovative exploration of philosophy and madness in the context of the critical engagement of Heidegger’s phenomenological ontology with Freudian psychoanalysis. Included is a play in which, after a mental breakdown, Martin Heidegger undergoes psychoanalytic treatment from Dr. Medard Boss. Boss is essentially caught between two intellectual giants: his patient, Heidegger, who challenges him to evolve beyond traditional Freudian psychoanalysis, and his mentor, Freud, who acts as a “ghostly” consultant in facilitating Heidegger’s return to health. The dialogue of the play consists of actual quotes taken from the major thinkers themselves, which enhances the authenticity of this fictitious production. In addition, the theoretical perspectives of Freud, Heidegger, Boss, and Ludwig Binswanger are included to enhance the readers’ background knowledge. In the process of disclosing these brilliant theorists, this book uncovers what each orientation has to offer the others.
E-Book

€22.00$29.00
​
Add to Cart
Richard Askay is professor of philosophy at the University of Portland, and Jensen Farquhar is a retired therapist, philosopher, and mediator in Washington state. Together, Askay and Farquhar have published articles and chapters, including Apprehending the Inaccessible: Freudian Psychoanalysis and Existential Phenomenology. Askay also co-translated and annotated (with Franz Mayr) the Zollikon Seminars by Martin Heidegger.
” Of Philosophers and Madmen contributes a fresh perspective on the theory and practice of psychotherapy as it marks out certain implications of philosophical analysis for the medical profession and for the future of the human sciences more generally.” — Dr. Calvin Schrag, George Ade Distinguished Professor of Philosophy, Purdue University
Foreword
Preface
Introduction
Of Philosophers and Madmen: A Play
Cast of Characters
Play Setting
Of Philosophers and Madmen
A Disclosure of Martin Heidegger, Medard Boss, and Sigmund Freud
On the Nature of Humans: Sigmund Freud
Finding Oneself in Heidegger’s Early Philosophy
Stemming the Tide: Martin Heidegger’s Critique of Freudian Psychoanalysis
A Creative Misunderstanding: Ludwig Binswanger
In Search of a Humanistic Grounding for Psychoanalysis: Medard Boss
Conclusion: Toward an Integration of Psychoanalysis and Phenomenological Ontology
Bibliography