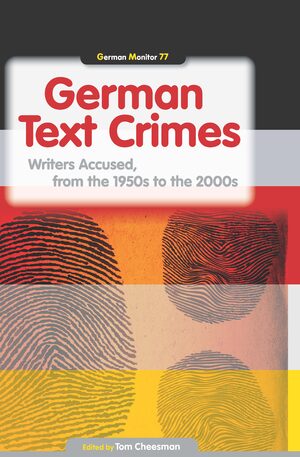 Editor: Tom Cheesman
German Text Crimes offers new perspectives on scandals and legal actions implicating writers of German literature since the 1950s. Topics range from literary echoes of the “Heidegger Affair” to recent incitements to murder businessmen (agents of American neo-liberal power) in works by Rolf Hochhuth and others. GDR songwriters’ cat-and-mouse games with the Stasi; feminist debates on pornography, around works by Charlotte Roche and Elfriede Jelinek; controversies over anti-Semitism, around Bernhard Schlink’s Der Vorleser / The Reader and Martin Walser’s lampooning of the Jewish critic Marcel Reich-Ranicki; Peter Handke’s pro-Serbian travelogue; the disputed editing of Ingeborg Bachmann’s Nachlaß; vexed relations between dramatists and directors; (ab)uses of privacy law to ‘censor’ contemporary fiction: these are among the cases of ‘text crimes’ discussed. Not all involve codified law, but all test relations between state power, civil society, media industries and artistic license.
E-Book

€71.00$90.00
​
Add to Cart
“Preece’s essay appears to be an appropriate conclusion to a volume that seeks to address various ‘German text crimes’ in that in his conclusion he assumes the role of accuser of both authors and critics by citing Emile Zola’s ‘J’accuse.’” - Siegfried Mews, University of North Carolina at Chapel Hill, in: Monatshefte 107.4 (2015), pp. 704-706
“The chapters thus highlight some of the most notorious controversies surrounding the publication of literary texts of the post-war era. All of them offer considered and thoroughly readable reconstructions of the ‘cases’ and debates, explanations for the ‘incriminating’ reception or notoriety that certain publications have achieved, and explanations of the reasons and specifically German or Austrian conditions that created a sense of offence—from the sensitivities arising from historical experience and the alleged tarnishing of good names to the conflation of moral and aesthetic criteria.” – Florian Krobb, National University of Ireland Maynooth, in: Modern Language Review 109.4 (2014), pp. 1145-46
"… an important touchstone for ongoing study of the relationship between art and politics in a Germany struggling with its identity, its place on the world stage, and its history. … Students will ﬁnd many of the cases engaging and provocative for their historical richness, and in a few cases for their challenges to dominant paradigms; and scholars will beneﬁt from its well-researched bibliographies and clear exegeses. " - Andrew Brandel, in: H-SAE, H-Net Reviews, November, 2013
"Notwithstanding the somewhat inappropriate punning of the title - German Text Crimes is a thought-provoking study of the relationship between politics and the arts, as well as a valuable contribution to the ever-growing scholarship on historical memory." - Houman Barekat, in: Times Literary Supplement 8 (2013) p. 27
Tom Cheesman: Introduction: Incriminating Texts – With Reflections on the Justiciability of Esra and Leyla
Duncan Large: ‘Part Woodcutter and Part Charlatan’: Tom Paulin’s Heidegger
Áine McMurtry: Writing Wrongs: Ingeborg Bachmann’s Poetic Drafts of the 1960s and their Contemporary Reception
David Barnett: Offending the Playwright: Directors’ Theatre and the ‘Werktreue’ Debate
Heike Bartel: Porn or PorNO: Approaches to Pornography in Elfriede Jelinek’s Lust and Charlotte Roche’s Feuchtgebiete
David Robb: Text Crimes against the GDR’s Revolutionary Heritage: The Differing Fates of Wolf Biermann and Wenzel and Mensching
Stuart Parkes: Martin Walser’s Tod eines Kritikers: A ‘Crime’ of Anti-Semitism?
Karoline von Oppen: Justice for Peter Handke?
Katharina Hall: Text Crimes in the Shadow of the Holocaust: The Case of Bernhard Schlink’s Der Vorleser/The Reader
Julian Preece: Incitements to Murder? The Killing of Businessmen in Fiction and Drama of the 2000s
Notes on Contributors
Index