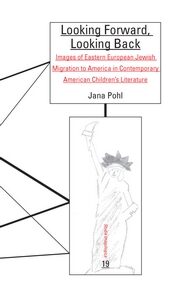 Author: Jana Pohl
How is the life-altering event of migration narrated for children, especially if it was caused by Anti-Semitism and poverty? What of the country of origin is remembered and what is forgotten, and what of the target country when the migration is imagined there a century later? Looking Forward, Looking Back examines today’s representation of Jewish mass migration from Eastern Europe to America around the turn of the last century. It explores the collective story that emerges when American authors look back at this exodus from an Eastern European home to a new one to be established in America. Focusing on children’s literature, it investigates a wide range of texts including young adult literature as well as picture books and hence sheds light on the dynamics of the verbal and the visual in generating images of the self and other, the familiar and the strange.
This book is of interest to scholars in the field of imagology, children’s literature, cultural studies, American studies, Slavic studies, and Jewish studies.
E-Book (PDF)

€81.00$103.00
​
Add to Cart
List of Figures and Illustrations
Acknowledgments
Introduction
Part I: The Corpus
The Historical and Personal Dimension of the Narratives
Part II: Theory: Image Studies
Functions
Aspects of Image Studies in Children’s Literature Research
Migration Narratives
Part III: The Country of Origin: Russia
Push-factor Anti-Semitism
Push-factor Poverty
Books without Push-factors
History and Historiography as a Frame of Reference
Cold War Ideology and Paratextual Clues
Disappearance of the Shtetl
Visual Russia: Samovars, Soldiers and the Absence of Poverty
Two Examples: Russia as the Contrapuntal Image
Conclusion
Part IV: The Target Country: America
Dreaming about America: the Image, its Origin and Variations in an Eastern European Jewish Context
The American Dream in Children’s Literature: Narrative Patterns and Traditions
The American Dream in the Corpus
Part V: The American Dream and Its Poetic Functions in Migration Narratives for Children
New York’s Lower East Side and the Exposure of the American Dream
Innocent Children and Sceptical Adults: the Image of America as a Device of Characterization
Laughing at America’s Gold: the Image as a Humorous Device
Part VI: Adapting an Immigrant Autobiography. Mary Antin’s The Promised Land (1912) and Rosemary Wells’s Streets of Gold (1999), Illustrated by Dan Andreasen
Mary Antin: The Promised Land
Rosemary Wells: Streets of Gold
Conclusion
Part VII: Conclusion
Part VIII: References
Index