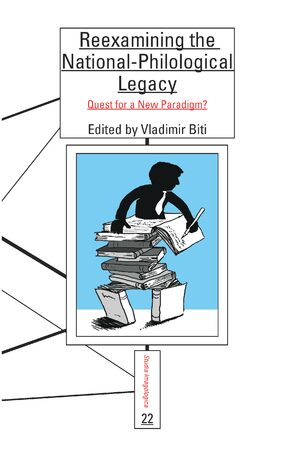 Quest for a New Paradigm?

Editor: Vladimir Biti
Has thinking, working and teaching in terms of national literatures become obsolete in today’s globalized world of hyphenated languages, literatures and cultures? Since the rise of modern European national philologies coincided with the emergence of modern European nation-states, does the dissolution of the latter in the European supranational unity imply the suspension of the former? Or we must, on the contrary, consider the fact that today’s Europe is not only postnational but, in its re-nationalized East-Central-European part, post-multinational as well, i.e., emerging out of the breakdown of the postimperial state formations such as the Soviet Union, Czechoslovakia and Yugoslavia?
E-Book (PDF)

€72.00$92.00
​
Add to Cart
Vladimir Biti: Introduction: Reexamining the National-Philological Legacy: Quest for a New Paradigm?
Section I. The Hyphenation of Literature: A Genealogy
Vladimir Biti: The Janus Face of Literary Bildung: Education and/or Self-Formation?
Section II. Decomposing Nations, Establishing Contact Zones: Toward a New Idea of Literature
Mario Grizelj: ‘Back’ to the West. Homecoming and Alterity around 1830
John Neubauer: “Humbly Report”? Svejk’s Voices from Exile
Svend Erik Larsen: With Other Eyes or the Eyes of Others? A Scandinavian Case
Eduardo F. Coutinho: The National Concept of Literature and Minority Group’s Identities in Latin America
Section III. The Spectral Border: ‘Major’ and ‘Minor’ Identities
Mladen Lazić and Jelena Pešić: National and European Identities among Political Elites and
Population in European Countries
Galin Tihanov: Do ‘Minor Literatures’ Still Exist? The Fortunes of a Concept in the Changing Frameworks of Literary History
Guido Snel: After the Bridge: The Bosnian War as a European Trauma in the Work of Emir Suljagić and Aleksandar Hemon
Section IV. The Politics of the Improper: Community as a Limit-Experience
Ulrike Kistner: The Literary-Political Beyond Nation, State, Nation-State. Critical Unhingings in the Thought of Jan Patočka and Hannah Arendt
Aleksandar Mijatović: Heteroessences: Community, Demonstratives and Interpretation in Agamben’s Philosophy of Language
Zrinka Božić Blanuša: What about the Politics of Deconstruction?
Notes on Contributors