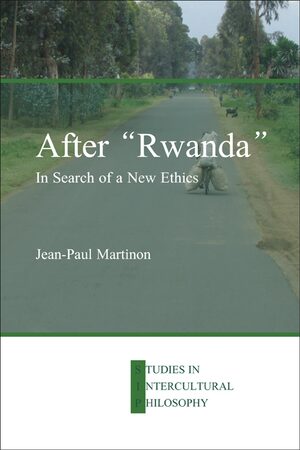 In Search of a New Ethics

Author: Jean-Paul Martinon
Is writing about peace after the Rwandan Genocide self-defeating? Whether it is the intensity of the massacres, the popularity of the genocide, or the imaginary forms of cruelty, however one looks at it, everything in the Rwandan Genocide appears to defy once again the possibility of thinking peace anew. In order to address this problem, this book investigates the work of specific French and Rwandese philosophers in order to renew our understanding of peace today. Through this path-breaking investigation, peace no longer stands for an ideal in the future, but becomes a structure of inter-subjectivity that guarantees that the violence of language always prevails over any other form of violence. This book is the very first monograph in philosophy related to the events of 1994 in Rwanda.
E-Book (PDF)

€88.00$111.00
​
Add to Cart
Jean-Paul Martinon is Programme Leader of the MPhil-PhD Programme in Visual Cultures at Goldsmiths College, University of London. He has written monographs on a Victorian workhouse ( Swelling Grounds, Rear Window, 1995), the idea of the future in the work of Derrida, Malabou and Nancy ( On Futurity, Palgrave, 2007), the temporal dimension of masculinity ( The End of Man, Punctum, 2013), and the event of knowledge in museums ( The Curatorial: A Philosophy of Curating, Bloomsbury, 2013). In each case, he writes in an attempt to make sense of time: its staging in museums, its advent, its gender, its neglect, the ethics that derive from it, and the way it is used and abused to structure human life.
Acknowledgements
Introduction
Maternity – Ubuntu
Here I am
Without God
Maternity
Ubuntu
Filiality
A Logical Absurdity
Matrix – Akantu
Murders
Vanquished
The Matrix
Elect-Risk
The Blow Does Not Come
Neither Justice Nor Law
Material – Ahantu
Eyes
Face
Body
Scene
Horizon
Palaver
Maturity – Ahantu
God
Embodiment
Otherwise
Present
Sacyega & Ngoma
History
Matrimony – Ubumuntu
Side-by-side
To-let-be
Face-to-face
Side-by-side-face-to-face
Matrimony
Kubana
Matter – Ukuntu
Writing, Reading
What Comes? Here I am
What is? Thou Shall Not Kill
Kirazira
A Hermeneutic Effort
Necessity
Materiel – Ikintu
Stop
By the Crater
With-Out Distance
Vigilance
Work Procreation
At War, in Love
Conclusion
Bibliography
Index