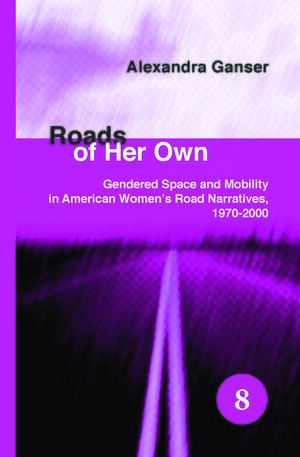 Roads of Her Own

Author: Alexandra Ganser
Reading Jack Kerouac’s classic On the Road through Virginia Woolf’s canonical A Room of One’s Own, the author of this book examines a genre in North American literature which, despite its popularity, has received little attention in literary and cultural criticism: women’s road narratives. The study shows how women’s literature has inscribed itself into the American discourse of the Whitmanesque “open road”, or, more generally, the “freedom of the road”. Women writers have participated in this powerful American myth, yet at the same time also have rejected that myth as fundamentally based on gendered and racial/ethnic hierarchies and power structures, and modified it in the process of writing back to it. The book analyzes stories about female runaways, outlaws, questers, adventurers, kidnappees, biker chicks, travelling saleswomen, and picaras and makes theoretical observations on the debates regarding discourses of spatiality and mobility—debates which have defined the so-called spatial turn in the humanities.
The analytical concept of transdifference is introduced to theorize the dissonant plurality of social and cultural affiliations as well as the narrative tensions produced by such pluralities in order to better understand the textual worlds of women’s multiple belongings as they are present in these writings. Roads of Her Own is thus not only situated in the broader context of a constructivist cultural studies, but also, by discussing narrative mobility under the sign of gender, combines insights from social theory and philosophy, feminist cultural geography, and literary studies.
Key names and concepts: Doreen Massey – Rosi Braidotti – Literary Studies – Spatial Turn – Gendered Space and Mobility – Nomadism – Road writing – Transdifference – American Culture – Popular Culture – Women’s Literature after the Second Wave – Quest – Picara.
E-Book

€92.00$118.00
​
Add to Cart
”… the monograph has precise and structured arguments, innovative use of theoretical concepts, and the text is readable in spite of its theoretically informed language. Ganser manages to enage theories of narratology and literary studies, Gender Studies, and Cultural Studies to discuss the long-neglected but strongly productive and quite heterogeneous genre of women’s road narratives, and thus to contribute enriching and innovative insights into the genre of travel writing at the crossroads of space, gender, and mobility.” - Carmen Birkle (Marburg), in: American Studies, Vol. 56.3, 2011, pp. 487-489
Points of Departure
Contemporary American Women’s Road Narratives: Genre and Gender Space, Gender, Mobility
Questers on the Road
Para-Nomadic Travelers
Ex-centric & Wayward: Picaras of the Late 20th Century
Conclusion
Works Cited
Primary Works
Secondary Literature
Index