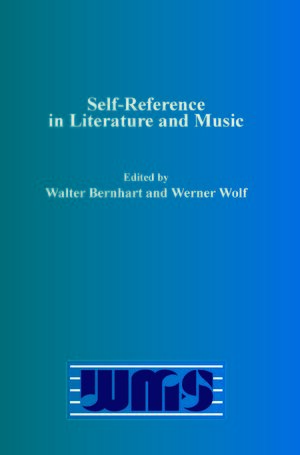 Self-Reference in Literature and Music

Series:  Word and Music Studies, Volume: 11 and  Word and Music Studies Online, Volume: 11
Editors: Walter Bernhart and Werner Wolf
This volume contains a selection of nine essays with an interdisciplinary perspective. They were originally presented at the Sixth International Conference on Word and Music Studies, which was held at Edinburgh University in June 2007 and was organized by the International Association for Word and Music Studies (WMA).
The contributions to this volume focus on self-reference in various systematic, historical and intermedial ways. Self-reference – including, as a special case, metareference (the self-conscious reflection on music, literature and other medial concerns) – is explored, among others, in instrumental music by Mozart, Mahler and Satie, in the structure and performance of (meta-)operas, in operatic adaptations of drama and filmic adaptations of opera, as well as in intermedial novelistic references to music. The essays cover a historical range from the 18th century to the present and are of interest to literary and opera scholars and students, musicologists as well as all readers generally interested in medial self-reference and intermediality studies.
E-Book (PDF)