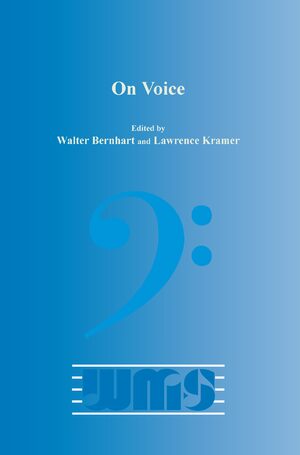 Series:  Word and Music Studies, Volume: 13 and  Word and Music Studies Online, Volume: 13
Editors: Walter Bernhart and Lawrence Kramer
The essays collected here raise a simple but rarely asked question: just what, exactly, is voice? From this founding question, many others proliferate: Is voice an animal category, as Aristotle thought? Or is it distinctively human? Is it essentially related to language? To music? To song and singing? Is it a mark of presence or of absence? Is it a kind of object? How is our sense of voice affected by the development of recording technology? The authors in this volume approach such questions primarily by turning away from a general idea of voice and instead investigating what can be learned by attending to the qualities and acts of particular voices. The range is wide: from Poe’s “Leigeia” to Woolf’s The Waves, from Jussi Björling to Waltraud Meier, from song to oratorio to opera and beyond. Throughout, consistent with the volume’s origin in papers delivered at the eighth biennial meeting of the International Association for Word and Music Studies, the role of voice in joining or separating words and music is paramount. These studies address key topics in musicology, literary criticism, philosophy, aesthetics, and performance studies, and will also appeal to practicing musicians.
E-Book (PDF)