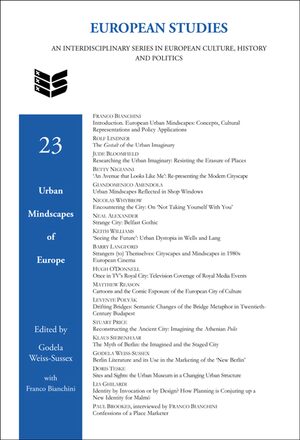 Editors: Godela Weiss-Sussex and Franco Bianchini
Urban mindscapes are structures of thinking about a city, built on conceptualisations of the city’s physical landscape as well as on its image as transported through cultural representation, memory and imagination.
This book pursues three main strands of inquiry in its exploration of these ‘landscapes of the mind’ in a European context. The first strand concerns the theory and methodology of researching urban mindscapes and urban ‘imaginaries’. The second strand investigates some of the representations, symbols and collective images that feed into our understanding of European cities. It discusses representations of the city in literature, film, television and other cultural forms, which, in James Donald’s phrase, constitute ‘archives of urban images’. The third and last section of the volume concentrates on the relationship between the collective mindscapes of cities, urban policy and the practice of city marketing.
E-Book (PDF)

€81.00$103.00
​
Add to Cart
Authors in this volume
Franco BIANCHINI: Introduction. European Urban Mindscapes: Concepts, Cultural Representations and Policy Applications
Methodology and Concept Formation
Rolf LINDNER: The Gestalt of the Urban Imaginary
Jude BLOOMFIELD: Researching the Urban Imaginary: Resisting the Erasure of Places
Betty NIGIANNI: ‘An Avenue that Looks Like Me’: Re-presenting the Modern Cityscape
Giandomenico AMENDOLA: Urban Mindscapes Reflected in Shop Windows
Nicolas WHYBROW: Encountering the City: On ‘Not Taking Yourself With You’
Cultural Representation of the City
Neal ALEXANDER: Strange City: Belfast Gothic
Keith WILLIAMS: ‘Seeing the Future’: Urban Dystopia in Wells and Lang
Barry LANGFORD: Strangers (to) Themselves: Cityscapes and Mindscapes in 1980s European Cinema
Hugh O'DONNELL: Once in TV’s Royal City: Television Coverage of Royal Media Events
Matthew REASON: Cartoons and the Comic Exposure of the European City of Culture
Levente POLYÁK: Drifting Bridges: Semantic Changes of the Bridge Metaphor in Twentieth-Century Budapest
Stuart PRICE: Reconstructing the Ancient City: Imagining the Athenian Polis
Applications of the Concept of Urban Mindscapes
Klaus SIEBENHAAR: The Myth of Berlin: the Imagined and the Staged City
Godela WEISS-SUSSEX: Berlin Literature and its Use in the Marketing of the ‘New Berlin’
Doris TESKE: Sites and Sights: the Urban Museum in a Changing Urban Structure
Lia GHILARDI: Identity by Invocation or by Design? How Planning is Conjuring up a New Identity for Malmö
Paul BROOKES, interviewed by Franco BIANCHINI: Confessions of a Place Marketer