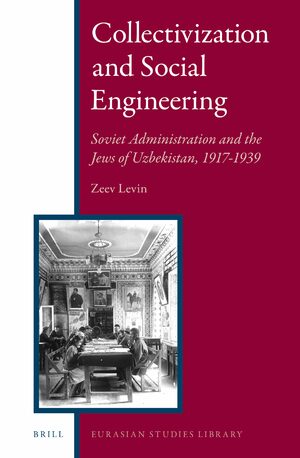 Collectivization and Social Engineering: Soviet Administration and the Jews of Uzbekistan, 1917-1939

Author: Zeev Levin
Zeev Levin seeks to provide a comprehensive picture of government efforts to socialize the Jewish masses in Uzbekistan, a process in which the central Soviet government took part, together with the local, republican and regional administrations and Soviet Jewish activists. This research presents a chapter in the history of the Jews in Uzbekistan, as well as contributing to the study of the socialization process of the Jewish population in the USSR in general. It also contributes to the study of relations among political and government bodies and decision makers. The study is based on archival documents and provides a unique glance at the implementation of Soviet nationalities policy towards Bukharan Jews while comparing it to other national minority groups in Uzbekistan.
E-Book

€105.00$138.00
​
Add to Cart
Zeev Levin completed his doctorate at the School of History at Tel-Aviv University, the Department of Middle Eastern and African History (2009), specializing in the Jewish history of Eurasia in the late 19th and 20th centuries. During his post-doctorate he conducted research on Jewish and non-Jewish refugee populations in Central Asia and Siberia during World War II. He is currently serving as lecturer at the Hebrew University of Jerusalem and Head of the Eurasian Unit at the Harry S. Truman Institute for Advancement of Peace.
Foreword
A note on: Transliteration, Abbreviations, Acronyms and Citations
Glossary of Terms and Abbreviations

Chapter 1: "The Wastelands" - The Jews of Central Asia
Changes in the legal status of Jews in Central Asia
Jewish community organization
How many Jews were there?
Indexes of literacy among the Jewish population
Characteristic occupations and livelihoods

Chapter 4: The Hungry Steppe: The Plans
Types of Agricultural Settlement
Establishment of the first Jewish agricultural artels
The Governtment and Incentives for Settlers
Activities of the Komzet Committee: planning and implementation
Operations of Ozet in Uzbekistan, 1926-1930
Settlement Plans for Jews of Uzbekistan

Chapter 5: The Hungry Steppe: The Implementation
Funding the kolkhozes
Enrollment and Settlement Rates
Everyday life in Jewish kolkhozes
Health and Security
Women in the fields
Interactions with local populations and rural authorities
Summing up the Achievements of Jewish settlement

Chapter 6: Not only in the Steppe: Building an Urban Working Class
Organization of small producers into industrial artels
"Socialist" enterprises
Between equality, internationalization and discrimination
Women in industry
Training for industry

End of an Era, and an Epilogue

Table of Images and Charts

2.1 – Advertisement of a concert titled "Kol Nidrei" (a central pray of Yom Kipur) organized on the night of Yom Kipur Oct. 13, 1929. The program included antireligious address, readings from Shalom Aleikhem and a Jaz concert.
2.2 – Advertisement of an antireligious address held in a club at the Jewish neighborhood of Samarkand followed by a screening of a movie: "Blue Express"

5.1 – Plan of a Jewish Kolkhoz: Central building is a club and the offices, service buildings are on the front and back wile the living houses are to the sides. Note the planned electrification.
5.2 – Plan of an "European style" living house