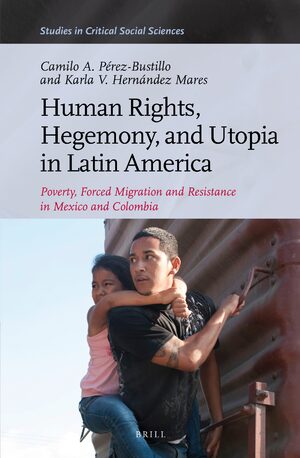 Poverty, Forced Migration and Resistance in Mexico and Colombia

Authors: Camilo Pérez Bustillo and Karla Hernández Mares
Human Rights, Hegemony and Utopia in Latin America: Poverty, Forced Migration and Resistance in Mexico and Colombia by Camilo Pérez-Bustillo and Karla Hernández Mares explores the evolving relationship between hegemonic and counter-hegemonic visions of human rights, within the context of cases in contemporary Mexico and Colombia, and their broader implications. The first three chapters provide an introduction to the book´s overall theoretical framework, which will then be applied to a series of more specific issues (migrant rights and the rights of indigenous peoples) and cases (primarily focused on contexts in Mexico and Colombia,), which are intended to be illustrative of broader trends in Latin America and globally.
E-Book (PDF)

2. Poverty as a Crime against Humanity: International Poverty Law, Human Rights, and Global Justice, from Below
Poverty as a crime against humanity
Poverty as Violence
Poverty as crime against humanity and the right to be human: ethical and philosophical frameworks as necessary but insufficient
Poverty, human rights, global justice and the “epistemologies of the South”
Relevant normative frameworks
Freedom from want, freedom from poverty, the right not to be poor, ESC rights and global order: the “original understanding”
International Poverty Law as a Framework for Convergence
Mexico as case study
Recent Developments in International Poverty Law
The Guiding Principles, the “poverty of rights,” and “human rights from below”: poverty, self-determination, and violence
Origins and evolution of the Guiding Principles
The Guiding Principles in their historical context: the Universal Declaration of Human Rights and its origins

3. The Road to San Fernando: theoretical frameworks as to forced migration and forced displacement within the context of global justice and human rights
Global rights and migrant rights
Global justice, migration policy, and migrant rights
Conceptual frameworks as to global justice
Broader context of Guerrero case: Tlapa York
Conceptual framework
Those Who Leave and Those Who Stay Behind: from Central America, through Mexico, to the indigenous communities of Mexico that migrate to New York

4. Peoples in Movement- International tribunals of conscience and struggles of migrants, refugees, and the displaced for human rights “from below”
Case study
Evolving articulations of migrant rights
Emerging elements of a new right
Peoples in Movement and Indigenous Peoples: potential “chains of equivalence”
Conclusions as to ITC case study
The Massacre
The San Fernando cases before the Permanent Peoples Tribunal (PPT)
Summary of PPT Jury's findings
Responsibility of the US Government
Responsibility of the Mexican Government

5. The counter-hegemonic origins and potential of human rights, the status of the rights of indigenous peoples in Latin America, and the World Bank as a case study
Indigenous rights issues as a representative case
Historical Dimensions
Illustrative Policies Adopted by Other Multilateral Organizations
Conclusion: Implications of Current World Bank Policies for Indigenous Peoples

7. Las Abejas of Acteal: from massacre to resurrection
Mexico´s Zapatistas as a point of departure: translating and decolonizing human rights
Implications of the cases for broader issues as to indigenous and human rights
Las Abejas of Acteal
Poverty, Las Abejas, and the “theology of suffering”
Teología india (indigenous theology)
The origins of Las Abejas
Exodus, liberation, forced displacement and forced migration
The impact of counter-insurgency, militarization and paramilitarism
The aftermath of the Massacre
The search for justice as to the Acteal case
Divisions within Las Abejas and the Zedillo case
Impact of the massacre on Las Abejas

8. The right to community autonomy, justice, and security in Mexico and Colombia as a form of resistance
Citizen´s Council for the Security of Humauxtitlán/Consejo Ciudadano por la Seguridad de Huamuxtitlán
When the bells are tolled, the people cry out their demands
Guerrero´s CRAC PC
How did Guerrero´s CRAC Policia Comunitaria first emerge?
Northern Cauca region in Colombia
The centrality in Colombia of its indigenous movement and of the Cauca region and the Nasa
The Guardia Indígena and utopian traces
Conclusion

Bibliography
Index
All interested in human rights, contemporary Mexico and Colombia, migrant rights and the rights of indigenous peoples in Latin America and globally.