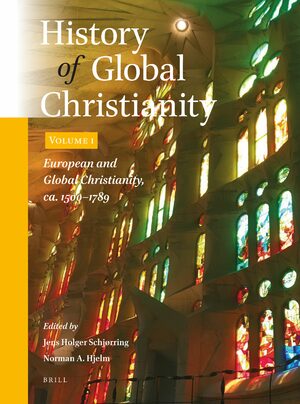 History of Global Christianity, Vol. I

编者： Jens Holger Schjørring and Norman A. Hjelm
Christianity was a global religion prior to the history recounted in European and Global Christianity, ca. 1500 - 1789. There were Christians in Asia and Africa before Europeans arrived in those places as well as in Latin America and North America, by movements of economic and political conquest and migration, and also Christian mission. This volume attests to the intensification of this globalization - in these 'new' continents as well as in Russia and the Ottoman territories. Simultaneously, in Europe Christianity was marked by Reformations, by confessional divisions, and by the Enlightenment. This global religion affected all structures of human life - society, politics, economics, philosophy, art, and the myriad ventures that form civilizations.

This is part of a three volume work on the history of global Christianity. Volume II and III address the 19th and 20th centuries respectively and will appear in 2018.
精装本

Norman A. Hjelm, Teol.Dr. (h.c.) (Uppsala University, 2009), has been senior theological editor and director of Fortress Press in the United States, an executive with the Lutheran World Federation in Geneva, Switzerland, and an ecumenical officer for the National Council of Churches in the U.S. Most recently he has contributed to The Finnish and Estonian Churches during the Cold War (2016) and to The North American Christian Community and the Cold War (2017).

1 Catholicism in Spain, Portugal, and their Empires
Mariano Delgado

All interested in the global history of Christianity, its expansion, its relationships to societies and civilizations, and its internal confessional development. Undergraduate and postgraduate students, and students and specialists in history, culture, and ecclesiology.