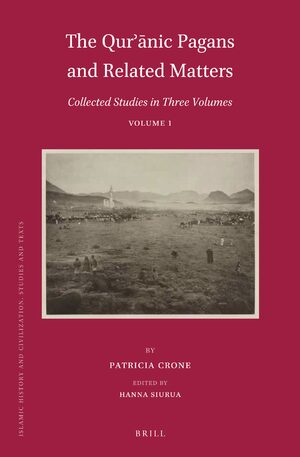 The Qurʾānic Pagans and Related Matters

Editor: Hanna Siurua
Author: Patricia Crone
Patricia Crone's Collected Studies in Three Volumes brings together a number of her published, unpublished, and revised writings on Near Eastern and Islamic history, arranged around three distinct but interconnected themes. Volume 1, The Qurʾānic Pagans and Related Matters, pursues the reconstruction of the religious environment in which Islam arose and develops an intertextual approach to studying the Qurʾānic religious milieu. Volume 2, The Iranian Reception of Islam: The Non-Traditionalist Strands, examines the reception of pre-Islamic legacies in Islam, above all that of the Iranians. Volume 3, Islam, the Ancient Near East and Varieties of Godlessness, places the rise of Islam in the context of the ancient Near East and investigates sceptical and subversive ideas in the Islamic world.

The Iranian Reception of Islam: The Non-Traditionalist Strands
Islam, the Ancient Near East and Varieties of Godlessness

"..once again she has forced scholars to engage her arguments, made a strong case for skepticism of the traditional accounts, and set the direction of a debate for years to come."
Herbert Berg in The American Journal of Islamic Social Sciences 34:2
Editor’s preface
Author’s preface
1. How did the Qurʾānic pagans make a living?
2. Quraysh and the Roman army: Making sense of the Meccan leather trade
3. The religion of the Qurʾānic pagans: God and the lesser deities
4. Angels versus humans as messengers of God: The view of the Qurʾānic pagans
5. The Qurʾānic mushrikūn and the resurrection (Part I)
6. The Qurʾānic mushrikūn and the resurrection (Part II)
7. The Book of Watchers in the Qurʾān
8. War
9. Jewish Christianity and the Qurʾān (Part I)
10. Jewish Christianity and the Qurʾān (Part II)
11. Pagan Arabs as God-fearers
12. Problems in sura 53
13. No compulsion in religion: Q. 2:256 in medieval and modern interpretation
14. Islam and religious freedom
15. Tribes without saints
List of Patricia Crone’s publications
Index to volume 1