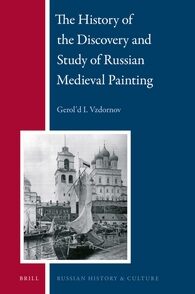 The History of the Discovery and Study of Russian Medieval Painting

AutorIn: Gerol'd I. Vzdornov
This is the first study in any language to trace the emergence of the art historical interest in icon painting in the nineteenth century with its evident impact on the course of Russian modernism in the twentieth century. Given the surge in popularity of the Russian avant-garde, a book devoted to the gradual awareness of the artistic value of icons and their effect on Russian aesthetics is timely. The discoveries, the false starts, the incompetence, the interaction of dilettantes and academics, the meddling of tsars and church officials, all make for a fascinating tale of growing cultural awarenss. It is a story that prepares the ground for the explosioin of Russian cultural creativity and acceptability in the early twentieth century.
E-Book

€ 199,00$ 229,00
​
In den Warenkorb
Gerol'd Vzdornov graduated from Moscow State University, History Faculty, Department of the History and Theory of Art (1959). Having received his Ph.D. in 1985, he became chief researcher at the State Scientific Research Institute of Restoration, Corresponding Member of the Russian Academy of Sciences (1994), and Honorary Member of the Russian Academy of Fine Arts (2004). He authored about 300 works, including 20 monographs.
"a superb English translation of Gerold Vzdornov’s 1986 seminal study of the nineteenth century’s discovery and study of Russian medieval icons and frescoes within imperial Russia. The welcome English version of one of his encyclopedic and beautifully illustrated monographs should become a staple of every university library and essential reading for scholars and students interested in the history and culture of imperial Russia."

"The evidence and conclusions of this monograph should shatter once and for all various preconceived notions that the destruction of Russian religious art began with the Bolshevik regime, that restoration work always involved modern understandings of the word “restoration,” and that Russian medieval painting was revered throughout the ages."

"Through the lens of art history Vzdornov delivers nothing less than a reinterpretation of late imperial Russian history and a chronicling of the destruction of much of ancient medieval Russian and Ukrainian art up through the turn of the twentieth century. It is little wonder that medievalists and early modernists often have to rely on surviving embroideries and manuscript illustrations to reconstruct the art and symbolism of their eras."

Christine D. Worobec, review of The History of the Discovery and Study of Russian Medieval Painting, by Gerol’d I. Vzdornov, Journal of Icons Studies 2 (2019) - https://doi.org/10.36391/JIS2/006BR
Preface

Chapter One
General Information on Russian Icons and Frescoes
The religious nature of Medieval Russian painting. — Untoward conditions of icon preservation. The destruction of surface texture and the darkening of the icon’s protective coat. Restoration techniques. — Mural paintings and causes of their poor condition. — Seventeenth-century conservation in the Moscow Kremlin. — On the rare deliberate alterations of painting in Rus'. — The eighteenth-century attitude to works of antiquity. — “Conservation" in the reign of Catherine II. — Medieval Russian painting and Mikhail Lomonosov. — Jacob von Stählin’s materials and their significance for the history of Russian art.


Chapter Two
First Steps in the Discovery of Medieval Russian Painting
Russian antiquities discovered in the late eighteenth century. — Historico-archaeological expedition of K. M. Borozdin (1809—10). — From monuments of written language to those of painting. N. M. Karamzin’s comment on the manuscript illuminations and mosaics of the Kievan St. Sophia. — The fate of the frescoes of the St. George Church in Staraya Ladoga. — P. I. Keppen and his List of Russian Monuments Subservient to the Compilation of the History of Arts and National Palaeography (1822). — Prerequisites for the growth of public interest in Russia’s history: the upsurge of popular-patriotic sentiment during the war against Napoleon; the aesthetic of romanticism in literature and art; the internal policy of Nicholas I.


Chapter Three
The Artist-Archaeologist F. G. Solntsev and the Artist-Restorer N. I. Podkliuchnikov
F. G. Solntsev and his artistic and archaeological activities. — The uncovering of the frescoes of the St. Demetrius Cathedral in Vladimir. — Restoration of wall paintings in the Kievan St. Sophia. — The 1842 law on the preservation of monuments. — Once again concerning the fate of the frescoes in Staraya Ladoga. — The beginning of conservation work in Moscow. — N. I. Podkliuchnikov as first professional restorer of medieval Russian painting. — The conservation of the iconostases in the Dormition Cathedral of the Moscow Kremlin and the church in the village of Vasil'evskoe near Shuia. — F. G. Solntsev’s drawings in Drevnosti Rossiiskogo Gosudarstva (Antiquities of the Russian State). — Publication of mosaics and frescoes of the Kievan St. Sophia. — Addendum: the artist-archaeologist N. N. Martynov and his collection of sketches of medieval paintings of Novgorod, Pskov, and Staraya Ladoga.


Chapter Four
The 1840s: Men of Letters, Palaeologists, Collectors
N. D. Ivanchin-Pisarev and S. P. Shevyrev. — Historico-archaeological works of I. M. Snegirev and I. P. Sakharov. — The Old Believer community and its significance in the preservation of old artworks. — I. M. Snegirev’s discourses with icon painters and connoisseurs of icon painting at the Preobrazhenskoe and Rogozhskoe cemeteries. — Private and public collections of icons. Criteria for their selection. — Moscow home chapels (molennye) as described by F. I. Buslaev. — A. F. Sorokin’s collection. Classification of Sorokin collection of icons in accordance with notes made by the collector. — Ancestral collections. Icons of the Stroganov school in S. G. Stroganov’s collection. — M. P. Pogodin’s old artworks repository. — D. A. Rovinskii and his book, Obozrenie ikonopisaniia v Rossii do kontsa XVII veka (A Survey of Icon Painting in Russia up to the End of the Seventeenth Century).


Chapter Five
F. I. Buslaev and His Contemporaries
The 1860s Narodnost' as the key idea of the era. — Precursors of Moscow museums. The Moscow Public Museum and the Rumiantsev Museum. — P. I. Sevast'ianov and his archaeological expeditions and collections. — A. E. Viktorov. First publications of the Moscow Public Museum. — The Society of Medieval Russian Art at the Moscow Public Museum. The Society’s publications. — F. I. Buslaev. His biography and works on art. — Foreign critics’ comments on Russian art as reviewed by F. I. Buslaev. — S. D. Filimonov as editor, scholar, and collector. — Russian antiquities assembled at the St. Petersburg Academy of Arts. — V. A. Prokhorov. His journals, Christian Antiquities and Archaeology and Russian Antiquities. — V. A. Prokhorov’s lectures on the history of Medieval Russian art delivered at the Academy of Arts.


Chapter Seven
Museums, Private Collections, and Exhibitions
The concept of a national museum as presented in the projects of F. P. Adelung and G. von Wiechman. — The Historical Museum in Moscow. I. E. Zabelin and V. N. Shchepkin. — The museum in Tver. A. K. Zhiznevskii. — The Rostov museum. — Provincial statistical boards and learned archival commissions. — Church museums. — The Synodal vestry in the Moscow Kremlin. The Archimandrite Savva (Sabbas) and his Index for the viewing of the vestry. — The museum of church archaeology at the Kiev Ecclesiastical Academy. N. I. Petrov. — The collections of A. E. Sorokin, A. N. Murav'ev, and Porfirii Uspenskii. — Museums of church archaeology at the ecclesiastical academies of Moscow and St. Petersburg. — The department of church archaeology at the Society of Lovers of Spiritual Enlightenment and the Society’s museum. — The Tula eparchial depository of antiquities. Depositories of antiquities in Vladimir and Archangel. — Private museums of V. A. Prokhorov, F. M. Pliushkin, A. S. Uvarov, and P. I. Shchukin. — The collectors N. M. and A. M. Postnikov and I. L. Silin. Antiquaries T. F. and S. T. Bolshakov. — N. S. Leskov and his contribution to the popularization of Medieval Russian painting. — Russian antiquities at the World Exposition in Paris in 1867. — Exhibitions at archaeological congresses. Church antiquities at the exhibition of the Eighth Archaeological Congress in Moscow in 1890. — The art and archaeology exhibition in St. Petersburg in 1898. On the Moscow exhibitions of the representations of Christ and the Mother of God in 1896 and 1897.


Chapter Eight
Academy and University Scholarship
Medieval Russian painting as reflected in the Proceedings of the Second Department of the Academy of Sciences. I. I. Sreznevskii. — Descriptions of manuscript collections and single codices as a source for the study of Byzantine and Russian miniatures. V. N. Shchepkin’s views on the illuminated manuscripts. — Chairs of the history of art in metropolitan and provincial universities. — N. P. Kondakov. The Odessa period of his life and work: from classical archaeology to the history of Byzantine art. — Kondakov’s contemporaries. — The St. Petersburg period of Kondakov’s life and work: from Byzantine to Russian antiquities. The importance of his report “On the Scientific Objectives of the History of Medieval Russian Art.” — V. V. Stasov. His articles on art. The atlas The Slavonic and Eastern Ornament in Ancient and Modern Manuscripts (1887). — Problems of art and literature in works by A. I. Kirpichnikov. — Church archaeology as a subject of study and teaching in theological academies. I. D. Mansvetov, A. A. Dmitrievskii, A. P. Golubtsov. N. V. Pokrovskii and his iconographic investigations. — Art issues in E. E. Golubinskii’s History of the Russian Church. — E. K. Redin and D. V. Ainalov.