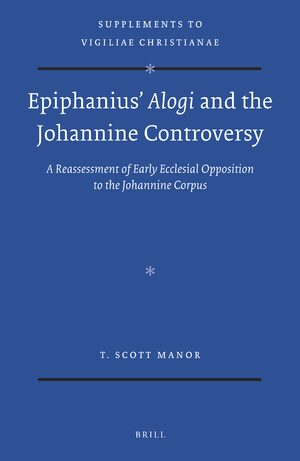 Epiphanius’ Alogi and the Johannine Controversy

A Reassessment of Early Ecclesial Opposition to the Johannine Corpus

Author: Scott Manor
In this work T. Scott Manor provides a new perspective on a common view, known as the ‘Johannine Controversy’, which maintains that the early church once tried to jettison the Gospel and Apocalypse of John as heretical forgeries.
Primary evidence comes from Epiphanius of Salamis, who mentions a heretical group with such views, the Alogi. This along with with other evidence from sources including Irenaeus, Hippolytus, Origen, Eusebius, Photius, Dionysius bar Salibi, Ebed-Jesu and others has led to the conclusion that a certain Gaius of Rome led the Alogi in this anti-Johannine campaign. By carefully examining Epiphanius’ account in relation to these other sources, Manor arrives at very different conclusions that question whether any such controversy ever existed at all.

1 The Evidence
2 An Implausible Consensus and a New Way Forward
3 Exonerating Gaius of Rome
4 Dismantling the Syrian Evidence: Dionysius bar Salibi and Ebed-Jesu

Section 2 - Epiphanius and the Alogi in Context

Section 3 - The Sources of Epiphanius’ Account of the Alogi

All scholars and students in Patristics and New Testament studies interested in the role of the Johannine literature in the early church, and/or the complex figure of Epiphanius of Salamis.