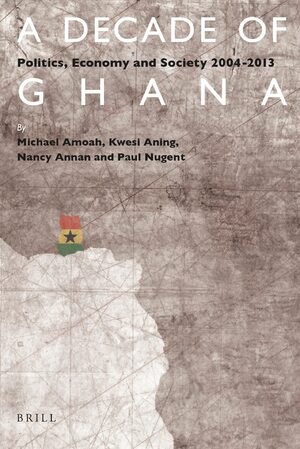 A Decade of Ghana

Authors: Michael Amoah, Kwesi Aning, Nancy Annan, and Paul Nugent
This chronology for 2004 to 2013 compiles the chapters on Ghana previously published in the Africa Yearbook. Politics, Economy and Society South of the Sahara. Political stability in Ghana in the last few years contrasted with dramatic developments in other West-African countries.
Ghana has a relatively high growth-rate, and also plays a role in regional security issues.
E-Book (PDF)

€19.95$27.00
​
Add to Cart
Michael Amoah is a Research Associate at the Centre of African Studies, SOAS, University of London. He specializes in Diplomacy and Foreign Policy Analysis, International Politics of Africa, Development and Ghana. He has authored two books: Nationalism, Globalization, and Africa (2011) and Reconstructing the Nation in Africa: the Politics of Nationalism in Ghana (2007).
Kwesi Aning is Director of the Faculty of Academic Affairs and Research (FAAR), Kofi Annan International Peacekeeping Training Centre, (KAIPTC), Accra, Ghana.
Nancy Annan is a Researcher with the Kofi Annan International Peacekeeping Training Centre (KAIPTC) focusing on Peace Support Operations, Gender Analysis and Advocacy, Conflict Systems, Research, Networking and Training. She has an MPhil in Social Work with specialization in Conflict Management and Resolution.
Paul Nugent is Professor of Comparative African History at the University of Edinburgh, and a former President of AEGIS. He is the author of Big Men, Small Boys and Politics in Ghana (1993); Smugglers, Secessionists and Loyal Citizens on the Ghana-Togo Frontier (2002); and Africa Since Independence (2012). For five years from 2016, Paul Nugent will be the holder of a European Advanced Researcher Grant for a project on African Governance and Space: Transport Corridors, Border Towns and Port Cities in Transition (AFRIGOS), of which Ghana forms an important part.
Students, politicians, diplomats, administrators, journalists, teachers, practitioners in the field of development aid as well as business people.