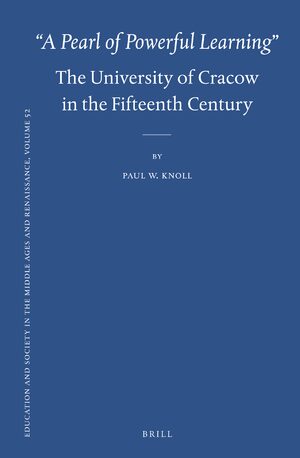 “A Pearl of Powerful Learning”: The University of Cracow in the Fifteenth Century

Author: Paul Knoll
The first fully developed history of the University of Cracow in this period in over a century, “A Pearl of Powerful Learning.” The University of Cracow in the Fifteenth Century places the school in the context of late medieval universities, traces the process of its foundation, analyzes its institutional growth, its setting in the Polish royal capital, its role in national life, and provides a social and geographical profile of students and faculty. The book includes extended treatment of the content of intellectual life and accomplishments of the school with reference to the works of its most important scholars in the medieval arts curriculum, medicine, law, and theology. The emergence of early Renaissance humanist interests at the university is also discussed.

Winner of the Early Slavic Studies Association 2016 Book Prize for most outstanding recent scholarly monograph on pre-modern Slavdom.
The work was described by the prize committee as: "A thoughtful, highly-informed, and nuanced history of the University of Cracow, an important institution in a pivotal period of Poland’s history. Knoll's treatment of such important issues as the role of the University in national life and the controversial and highly technical matter of the impact of Humanism are dealt with tactfully and thoughtfully. The book will become the definitive work on this topic, and will ensure that the material will rapidly be absorbed into general histories of education and of universities in the Renaissance."


Winner of The Polish Institute of Arts and Sciences of America's 2018 Oskar Halecki Award. This award recognizes a book of particular value and significance dealing with the Polish experience and is named after the distinguished 20th century Polish medieval historian, Oskar Halecki, who was one of the founders of PIASA. Professor Knoll will be recognized for this award during the 77th Annual Meeting of PIASA in Gdansk, Poland in June 2019.

€177.00$219.00
​
Add to Cart
Paul W. Knoll (Ph.D., Colorado, 1964) is Professor of History, Emeritus, at the University of Southern California. His publications in Polish and university history include The Rise of the Polish Monarchy. Piast Poland in East Central Europe 1320-1370 (Chicago, 1972).
"This is a masterful institutional and intellectual history of a university. The writing is clear and sometimes elegant. Brill deserves credit for publishing a very large study with footnotes at a time when some American, British, and Canadian presses are imposing draconian word limits, endnotes, and forcing authors to truncate documentation. This is a model study to be praised and imitated." Paul F. Grendler, University of Toronto, Emeritus, in: Renaissance Quarterly 70.4 (2017), pp. 1467-69.

''Winner of the 2016 Early Slavic Studies Association Book Prize, this monumental tome is a worthy culmination of a career dedicated to making medieval and early modern Polish history accessible to anglophone readers. Although Paul Knoll has written about a variety of subjects during a distinguished career that has spanned more than half a century, the UniversityofCracowwasthetopicofoneofhis ﬁrst published works and has remained a topic near and dear to his heart throughout his academic career and into retirement. After telling parts of this story over the years in various articles and essays, Knoll now provides a comprehensivehistory,the ﬁrst in any language in more than a century,of the ﬁrst 150 years of theUniversity of Cracow. [...] This eagerly anticipated volume is itself a pearl of powerful learning, which I highly recommend to anyone interested not only in Polish history but also in the history of education and the role of universities in medieval and early modern societies.
Paul Milliman, in Speculum , 94/1 (2019).


All interested in Polish history, university history, and the political, intellectual, and ecclesiastical culture of late medieval Europe.