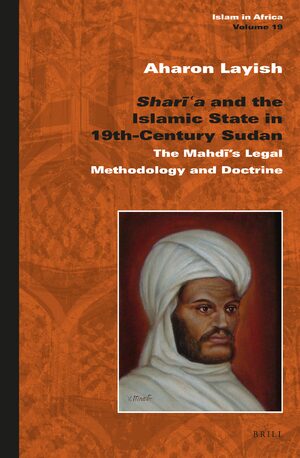 Sharīʿa and the Islamic State in 19th-Century Sudan

The Mahdī’s Legal Methodology and Doctrine

Author: Aharon Layish
The Sudanese Mahdī headed a millenarian, revivalist, reformist movement in Islam, strongly inspired by Salafī and Ṣūfī ideas, in late 19th century in an attempt to restore the Caliphate of the Prophet and “Righteous Caliphs” in Medina. As the “Successor of the Prophet”, the Mahdī was conceived of as the political head of the Islamic state and its supreme religious authority. On the basis of his legal opinions, decisions, proclamations and “traditions” attributed to him, an attempt is made to reconstruct his legal methodology consisting of the Qurʾān, sunna, and inspiration ( ilhām) derived from the Prophet and God, its origins, and its impact on Islamic legal doctrine, and to assess his “legislation” as an instrument to promote his political, social and moralistic agenda.
E-Book (PDF)

Aharon Layish, Ph.D. (1973), is Professor Emeritus of the Hebrew University of Jerusalem. He has published extensively on modern Islamic law, Muslim and Druze family law and waqf, tribal customary law. Recent publications are Sharīʿa and Custom in Libyan Tribal Society. An Annotated Translation of Decisions from the Sharī'a Courts of Ajdābiya and Kufra, Leiden, 2005; Legal Documents from the Judean Desert. The Impact of the Sharī’a on Bedouin Customary Law, Leiden, 2011.

'While a lot has been written on the Mahdī, it is indisputable that the content of this book Sharī‘a and the Islamic State in 19th-Century Sudan: The Mahdī’s Legal Methodology and Doctrine is an intellectual masterpiece. The book presents the important information one needs to know about the legal system of the Mahdī’s theocratic state in 19th-century Sudan. [...] Layish’s efforts in bringing the Mahdī documents together and his analysis of them has contributed to our knowledge of the legacy of the Mahdī’s legal traditions without repeating what other scholars have already said. The contents of this particular work, therefore, throw more light on the Mahdī’s legal methodology. This contribution of Layish’s will serve as a guide for whoever is interested in seeking to better understand the manšūr (proclamations) issued by the Mahdī himself, as well as the indispensable role of the Qur’ān and Sunna of the Prophet which served as sources for his concept of the Šarī‘a'.' - Martin A. Wullobayi, in: Islamochristiana 42 (2016)
'All in all, this is a very interesting (and, I repeat, extremely topical) case study of Mahdi’s legal discourse and of his state’s approach to legislation and one that is going to remain classical for the years to come. One only hopes that other similar subject matters will also be studied (as for example, the examination of legislation and law enforcement under the Mahdi’s successor).' - Sotirios S. Livas, in: Journal of Oriental and African Studies Vol. 26 (2017) pp. 452-454
Preface
Acknowledgments
Introduction: The Mahdī’s Documents as a Source of Legal History

CHAPTER ONE: THE MAHDIST STATE
1. Political Establishments
2. The Judiciary and Iftāʾ
3. The ʿUlamāʾ
4. The Ṣūfī Background

CHAPTER TWO: THE MAHDI’S LEGAL METHODOLOGY
1. Abolition of the Schools of Law
2. The Qurʾān and the Sunna
3. Inspiration (ilhām) Derived from the Prophet and from God
4. Auxiliary Sources of Law: Public Interest (maṣlaḥa), Necessity (ḍarūra)
5. The Mahdī’s Version of Ijtihād
6. The Impact of Ṣūfism on the Mahdī’s Legal Methodology

CHAPTER THREE: THE MAHDĪ’S LEGISLATION
Introduction
PART ONE: SLAVES
1. The Slave as Property and Person
2. Umm al-Walad Lost the Child by Her Master but Both She and the Children She Gave Birth to Fathered by Slaves Are Deemed Free in Her Master’s Lifetime
3. A Female Slave, the Husband’s Absence, Dissolution and Chastity
4. A Slave’s Acknowledgment of Theft Is Admissible and Punishable
5. The Mahdī Buys Concubines and Obtains His Free Wives’ Consent

PART THREE: OBLIGATIONS AND CONTRACTS
9. Prohibition of Lease for Rent and Agrarian Reform
10. Tenancy Is Permissible if Proprietor Incapable of Cultivating Land
11. Pledge Is Not Permissible as a Device for Circumventing Prohibition of Interest, but the Pledgee/Creditor May Deduct Expenses from the Profits
12. Right of Preemption Reserved Only to the Partner, Not the Neighbor

PART FOUR: FAMILY
a. Marriage
13. Marrying a Woman Promised to Another, Even after Consummation, Entails Dissolution and Discretionary Punishment
14. Prohibition for Marriage on Grounds of Fosterage Applies to All the Issue of Consanguine Brothers by Virtue of the Literal Meaning of a Ḥadīth
15. Marrying a Woman against Her Will or a Woman Who Does Not Share “Spiritual Communion” Is neither Permissible nor Advisable
16. The Mahdī as the Supreme Qāḍī Delegates to a Woman the Power to Marry off Her Daughter
17. The Mahdī Prescribes Maximal Rates for Ṣadāq; Deviation therefrom Entails Expropriation and Penal Sanctions
18. Marriage with a Fifth Wife, Though Irregular, Remains Intact; Instead, One of the Lawful Wives Is to be Divorced
19. The Mahdī Offers Four Wives to the Great Grandson of Shaykh Aḥmad al- Ṭayyib al-Bashīr
20. The Mahdī Marries a Fifth Wife with the Prophet’s Permission
21. Equality among Free Wives
22. The Mahdī’s Co-wives Opt for an Ascetic Life and the Hereafter as a Precondition for Marriage
23. Joining the Mahdiyya while Leaving Husband behind Is Not Deemed Disobedience
24. Coercive Measures to Enforce Obedience
25. Disobedient Wife Compelled to Renounce Rights in Divorce
26. A Woman’s Marriage to Another Man before Establishing Her Divorce from Her Former Husband Entails Separation and Restoration to Her First Husband

b. Divorce
27. Khulʿ and Financial Liability Prior to the Mahdiyya
28. Wife’s Right to Nuptial Gift Is Not Affected by Khulʿ Agreement in the Event of the Wife’s Emigration to Mahdist Territory while Leaving her Husband behind
29. Compulsory Khulʿ of a Disobedient Wife Though the Husband Is Advised to Renounce His Financial Rights
30. Enforced Khulʿ Following Marriage against a Woman’s Consent
31. Khulʿ Does Not Count in the Quota for Intermediate Marriage
32. Taṭlīq of a Woman Married against Her Will
33. Dissolution on Grounds of Non-Provision of Maintenance by an Absent Husband
34. Taṭlīq of the Wife of an Absent Husband
35. Taṭlīq on Grounds of Non-Provision of Maintenance
36. Rescission of Marriage on Grounds of Prejudice
37. Rescission of Marriage on Grounds of Difference of Religion
38. Termination of Marriage on Grounds of Difference of Religion and Rehabilitation by a New Marriage Contract
39. Duration of Waiting Period following Delay of Menstruation
40. A Separated Wife Who Has Not Completed One Menstrual Period May be Restored to Her Husband without Concluding New Marriage Contract
41. Should an Emigrant Wife Observe the Waiting Period of a Free or a Slave Woman?
42. The Mahdī Reinstates His Triply Divorced Wife with No Intermediate Marriage, with the Prophet’s Permission
43. Reinstating a Triply Divorced Wife with No Intermediate Marriage Entails Ḥadd Punishment
44. An Oath of Ḥarām or Oath of Continence without Explicitly Mentioning Repudiation Is Null and Void
45. An Oath of Ḥarām Is Not Binding unless God’s Name Is Mentioned
46. Breaking an Oath of Divorce Entails Expiation

c. Custody
47. The Right to Custody, the Welfare of the Parents and the Best Interest of the Child

PART FIVE: INHERITANCE AND WILLS
48. The Mahdī Offers the Widow of a Martyr the Entire Estate as Charity in a Gesture of Generosity
49. A Widow’s Waiting-Period Maintenance Is Taken Out of the Estate before Its Division
50. Bequests in Favor of Legal Heirs

PART SIX: HOMICIDE AND BODILY HARM
51. Intentional Homicide in Turco-Egyptian Territories Entails Compulsory Retribution with No Option of Forgiveness
52. No Punishment for Killing Committed on Turkish Territory if Repentance is Accepted by the State
53. Compensation for Bodily Injuries, Regardless of Their Nature, on the Basis of Slaves’ Price Where Equivalence in Injury Is Impossible
54. Warriors Causing Bloodshed to Muslim Civil Population Are Liable to Private Retaliation and State Sanctions

PART SEVEN: ḤADD OFFENSES
a. Theft and Highway Robbery
55. Literal Interpretation and Application of Q. 5:38
56. A Witness to Theft Failing to Report the Crime is Liable to Amputation
57. Personal Liability for the Theft: No Collective Amputation of Hands
58. Stealing from Booty Is Tantamount to Disbelief and Apostasy
59. Theft from Booty Entails Excommunication and Capital Punishment
60. The Mahdī Forgives a Highway Robber Who Repents and Acknowledges Crime after being Captured

b. Unlawful Sexual Intercourse and False Accusation Thereof
61. Stoning for Muḥṣan, Lashes for Bikr and Discretionary Punishment for Entering into Privacy with a Stranger
62. Marrying Another Man during Waiting Period from Divorcing Husband Entails Lapidation
63. Hundred Lashes on Women Exposing Themselves to Men
64. A Woman Exposing Her Face or Speaking Aloud Is Liable to 27 Lashes
65. Kidnapping a Free Married Woman and Marrying Her Entails Imprisonment and Lashes
66. Sodomy Entails Decapitation by Sword
67. A Husband Sentenced Successively to Ḥadd Punishment for Qadhf and to Compulsory Retribution for Killing His Wife’s Alleged Harasser

c. Wine Drinking
68. Consumption of Wine and Use of Tobacco Entails Ḥadd and Statutory Punishments

PART EIGHT: INTERNATIONAL LAW
a. Fayʾ
73. Expansive Definition of Fayʾ: Property Surrendered by Infidels by Agreement to be Distributed according to Q. 59:7

b. Booty
74. Property and Persons Acquired as Booty
75. Men, Women and Children as Booty
76. Division of Booty to Recipients
77. Compulsory Allocation of Booty to the Mahdī’s Kin and Companions

c. Jihād, Amān and Conversion to Islam
78. Women Participating Physically in Jihād Fighting
79. The Mahdī Urges General Gordon Either to Accept Amān or Embrace Islam
80. The Mahdī Invites the Governor of Egypt to Submit to Islam
81. A Dhimmī Staying behind in Turco-Egyptian Territory Given the Choice either to Convert to Islam or Be Proclaimed Ḥarbī
82. Redemption of “Infidel” Captives Converted to the Mahdiyya on Presumption of Good Faith

PART NINE: ALMS TAX
83. The Alms Tax as a Ritual and a State Instrument for Social Justice
84. Niṣāb and Rates of Zakāt
85. Recipients of Zakāt

PART TEN: PUBLIC MORALITY
86. “Governor of the Market” as Public Prosecutor
87. Appointment of Arbitrators to Consolidate the Mahdiyya and Enhance Public Morality in Light of “Commanding Right and Forbidding Wrong”
88. A Catalogue of Statutory Punishments on Moral Offenses
89. Negative Innovations Entail Discretionary Punishments

PART ELEVEN: TESTIMONY
90. A False Witness Is Liable Either to Be Decapitated or to Have His Property Taken Away or His Hand Amputated


The book is intended for students and researchers of Islamic law with special reference to Sudan. It will be valuable also to Islamologists, Arabists, legal and social historians, lawyers interested in comparative law, and social scientists.