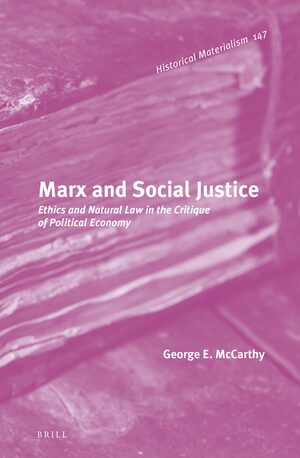 Ethics and Natural Law in the Critique of Political Economy

Author: George E. McCarthy
In Marx and Social Justice, George E. McCarthy presents a detailed and comprehensive overview of the ethical, political, and economic foundations of Marx’s theory of social justice in his early and later writings. What is distinctive about Marx's theory is that he rejects the views of justice in liberalism and reform socialism based on legal rights and fair distribution by balancing ancient Greek philosophy with nineteenth-century political economy. Relying on Aristotle’s definition of social justice grounded in ethics and politics, virtue and democracy, Marx applies it to a broader range of issues, including workers’ control and creativity, producer associations, human rights and human needs, fairness and reciprocity in exchange, wealth distribution, political emancipation, economic and ecological crises, and economic democracy. Each chapter in the book represents a different aspect of social justice. Unlike Locke and Hegel, Marx is able to integrate natural law and natural rights, as he constructs a classical vision of self-government ‘of the people, by the people’.
E-Book

€136.00$157.00
​
Add to Cart
George E. McCarthy is Professor of Sociology at Kenyon College, Gambier, Ohio. He received an M.A. and Ph.D. (1972) in philosophy from Boston College and an M.A. and Ph.D. (1979) in sociology from the Graduate Faculty, New School for Social Research. He has been a research fellow at the universities of Frankfurt/Main, Munich, and Kassel, Germany. He is the author of a number of works, including Marx and the Ancients: Classical Ethics, Social Justice, and Nineteenth-Century Political Economy (Rowman & Littlefield, 1990) and Classical Horizons: The Origins of Sociology in Ancient Greece (SUNY Press, 2002).
Acknowledgements

Introduction: The Ethical Archaeology of Justice in Marx

Dialectic between the Ancients and the Moderns: Natural Law and Natural Rights

5 Ecological Justice: Historical Materialism and the Dialectic of Nature and Society
Alienation of Production, Labour, and Nature
Dialectic of Nature and the Alienation of Consciousness
Natural Science as the Objectification and Social Praxis of Species Being
Science as Objectivity and Alienation
Social Metabolism, Contradictions, and Ecological Crises
Social Justice and the Natural Laws of Ethics and Ecology

Structures of Democracy, Economy, and Social Justice in Marx

6 Distributive Justice: Justice of Consumption, Economic Redistribution, and Social Reciprocity
Labour, Nature, and Society in the Gotha Program
Equality, Fair Distribution, and the Public Expenses of Production
Distribution, Fairness, and the Means of Social Consumption
Socialism, Self-Realisation, and Human Need
Critique of Reformist and Vulgar Socialism – Happiness without Meaning

7 Political Justice: Ethics and the Good Life of Democratic Socialism
Franco-Prussian War and the Formation of the Paris Commune of 1871
Dismantling the Old State and Rise of Political Democracy in the Commune
Organisation of Labour and Economic Democracy
‘Declaration to the French People’ and the Social Programmes of the Commune
Marx, Lincoln, and the Human Emancipation from Racial and Wage Slavery