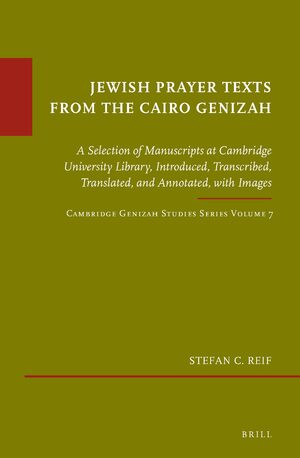 Author: Stefan C. Reif
Jewish Prayer Texts from the Cairo Genizah, which sets a new tone for future studies, consists of a selection of transcribed and translated Genizah fragments that contain some of the earliest known texts of rabbinic prayers. Reif describes in detail the physical makeup of each manuscript and assesses the manner in which the scribe has tackled the matter of recording a preferred version. He then places the prayer texts included in the manuscript within the context of Jewish liturgical history, explaining the degree to which they were innovative and whether they established precedents to be followed in later prayer-books. He offers specialists and more general readers a fresh understanding of the historical, theological, linguistic, and social factors that may have motivated adjustments to their liturgical formulations.
E-Book (PDF)

All interested in the religious, social and linguistic factors that impacted on the historical evolution of medieval Jewish prayer, as well as in how Hebrew manuscripts were written and transmitted.