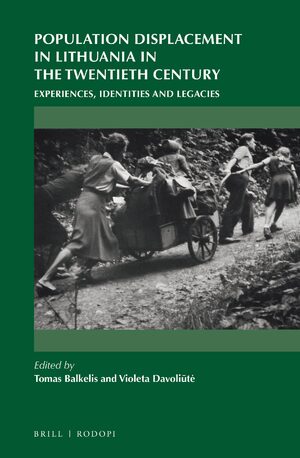 Population Displacement in Lithuania in the Twentieth Century

Editors: Tomas Balkelis and Violeta Davoliūtė
Population Displacement in Lithuania in the XXth Century: Experiences, Identities and Legacies is an edited volume written by historians from several countries offering a series of ground-breaking case studies on forced migration in Lithuania during and between the two World Wars. Starting with the premise that the mass movement of peoples during and after the Second World War needs to be understood in relation to the population displacement of the First World War, the authors draw on theoretical perspectives ranging from entangled histories, cultural theory and studies of nationalism to trace the ethnic, social and cultural transformation of Lithuanian society caused by the displacement of Lithuanians, Poles, Jews and Germans.

€101.00$134.00
​
Add to Cart
Dr. Tomas Balkelis is a visiting scholar at the Centre for Russian, East European and Eurasian Studies at Stanford University and a senior researcher at the Lithuanian Institute of History in Vilnius. He is the author of The Making of Modern Lithuania (Routledge, 2009). His research fields include nationalism, population displacement and paramilitary violence in the Baltic States.

Dr. Violeta Davoliūtė is a visiting researcher at MacMillan Centre for International and Area Studies, Yale University and a senior researcher at the Lithuanian Culture Research Institute in Vilnius. She is the author of The Making and Breaking of Soviet Lithuania: Memory and Modernity in the Wake of War (Routledge, 2013). Her research is focused on the history of the Lithuanian elites under Nazi and Soviet rule, questions of trauma and memory, and the social and cultural effects of forced modernization, sovietization and mass displacement in the Baltic States.

“The authors, perhaps inadvertently, acknowledge a debt to Jan Gross in also suggesting that the impact of the Second World War needs to be understood in relation to the First World War. Gross suggested in passing that Jews who fled eastwards in 1939-41 during the Soviet occupation of Belarus and western Ukraine did so less in anticipation of a Nazi onslaught than because of memories of pogroms during the First World War and its immediate aftermath. Whatever the validity of this suggestion, it is imperative to think about the associations between the two world wars, and one of the most fruitful aspects of this book is that its contributors are attuned to this kind of broad chronological perspective. Mid-century upheavals can no longer be detached from earlier developments.”

II. POPULATION DISPLACEMENT IN THE KLAIPĖDA REGION
CHAPTER 4
Vasilijus Safronovas. Population of the Klaipėda Region and the Balance of Power in the Eastern Baltic Region, 1919-1960
CHAPTER 5
Ruth Leiserowitz. Population Shifts and Displacement in the Memel Region

The volume may appeal to academics, students, specialists and educated laymen interested in the history of Baltic states, East European studies, Holocaust studies, Soviet studies, population displacement, forced migrations and military violence. It may be used as a textbook by students of late imperial Russian and East European history as well as in academic courses on nationalism, revolution, forced migrations, imperial decline, ethnic conflict, totalitarian regimes and war violence. The volume may attract attention of major university and national libraries as well as research institutes that specialize in population studies.