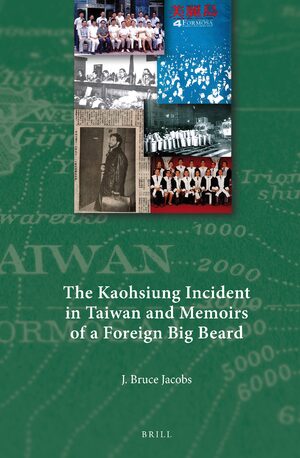 Author: J. Bruce Jacobs
The Kaohsiung Incident of 1979-1980 disturbed Taiwan’s dictatorship and ultimately contributed to Taiwan’s democratization. This book analyzes the precursors to the Kaohsiung Incident, the Kaohsiung Incident itself, the following trials and the contributions of these events to Taiwan’s democratization.
After the indictments were issued, the murder of the mother and twin daughters of Lin I-hsiung, one of the defendants, shocked Taiwan and the world. The government accused the author, a well-known scholar of Taiwan, of being involved in the murder case and he was placed under “police protection” for three months. Part 2 of this book is the writer’s memoir of that period.

€36.00$44.00
​
Add to Cart
J. Bruce Jacobs, Ph.D (1975, Columbia University) is Emeritus Professor of Asian Languages and Studies at Monash University in Melbourne, Australia. He has published many books, research articles and book chapters as well as newspaper columns on Taiwan and China.
From the reader's report:
'The author has given us a very, very wonderful book that many, I would hope, would read and take to heart. What he writes about is a major moment in modern Taiwan’s history and many should know it and what it has meant to the later evolution of Taiwan’s state and society—and place in the world. The book is very unique and useful piece of scholarship.'
Murray A. Rubinstein, Senior Research Scholar, Weatherhead Institute, Columbia University

'Jacob’s latest effort, The Kaohsiung Incident in Taiwan and Memoirs of a Foreign Big Beard, is geared toward academics or people with a specific interest in Taiwanese history and politics who would probably find the entire book interesting or at least valuable. But the second half of the book, which contains Jacobs’ memoir, is so much more engaging, unique and personal that it could make a fun read for anybody. It is almost a shame to put it last.'
Han Cheung, Taipei Times, Sat, Aug 13, 2016

'In this slim two-part volume titled The Kaohsiung Incident in Taiwan and Memoirs of a Foreign Big Beard, Jacobs provides the context in which the events leading to the transformative incident occurred (...) Part I, which constitutes the bulk of the book, is relatively straightforward and is short enough to serve as a useful introduction for readers who aren’t familiar with Taiwanese history.Far more personal is the second part of the book, where Jacobs describes the murder of the mother and twin daughters of activist Lin I-hsiung (one of the defendants first discussed in Part I) and how the atrocity affected the author’s own safety and freedom. (...) Jacobs’ brief history of a traumatic period in Taiwan’s not-too-distant-past is a reminder that democratization is not an end state but rather a process that is never completely achieved.'
J. Michael Cole, Taiwan Sentinel (https://sentinel.tw/memoirs-of-a-foreign-big-beard/)

'The title of Jacobs’s book, The Kaohsiung Incident in Taiwan and Memoirs of a Foreign Big Beard, immediately informs us that we’re in the right territory. Here we have a carefully negotiated balance of scholarly evenness and personal memoir. The monograph is attentively divided into two narratives. Drawing upon multiple sources, the contextual, scholarly section details the events leading up to the incident, its aftermath, and the implications of that fateful day. The author’s own participation in the events draws the reader in. From within, you get the sense of theatre that other accounts of the incident have not quite achieved. (...) Jacobs’s personal memoir is not the only one...yet [his]... marriage of emotional memoir to scholarly context in this volume is exemplary. (...) [T]his book is an important text that is useful not just for the study of Taiwan and the region, but also for comparative research on microhistorical inquiries of authoritarianism and protest as well as connected or transcultural histories.'
Niki J.P. Alsford, University of Central Lancashire, UK, International Journal of Taiwan Studies 1 (2018)

'Bruce Jacobs, an important figure in Taiwan history both as a principal and a scholar, has produced a useful, informative and long-awaited book on the political watershed events in Taiwan between late 1979 and mid-1980, along with the unexpected and unwanted roles he ended up playing in them. It is essential reading for anyone interested in democratization and the struggle for respect for human rights in modern Taiwan history. (...) This engaging, informative and reasonably priced volume belongs in the libraries of Taiwan history scholars and buffs and in the libraries of serious academic institutions throughout the world.'
DAVID CURTI S. WRIGHT, University of Calgary, The China Quarterly, 235 (2018)