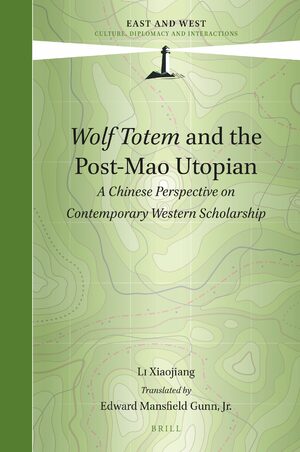 Wolf Totem and the Post-Mao Utopian

Author: Xiaojiang Li
Wolf Totem and the Post-Mao Utopian by Li Xiaojiang explores the controversial best-selling novel by the political economist Jiang Rong as an allegory of utopia through discussion of an encyclopaedic range of scholarship in the humanities and social sciences that offer thinking on topics introduced in the novel. In promoting the significance of utopian thought, Li stresses that the term for her study, “post-utopian criticism,” is not the same as anti-utopian criticism, but an analytical approach to criticism in order to addresses the shortcomings of postmodern and postcolonial theories applied to contemporary China, and to open up interpretive space for the specific historical experience of its people and its utopian ideals.
E-Book

€212.00$255.00
​
Add to Cart
Li Xiaojiang (李小江) now as a Special Visiting Professor of the Institute of Literature and Honorary Curator of the Women’s Culture Museum at Shaanxi Normal University (China). Since the 1980s, she has been carrying out the pioneering work on Women’s Studies in China and made outstanding achievements in the academic field. She has been as a Visiting Scholar at McGill University in Canada, Harvard University in the USA, Ochanomizu University and Nara Women’s University in Japan, etc. and has given lectures at many academic units in Europe, America and Asia. She has served as Chief Editor of three series of books, including Chinese Women’s Oral History in the 20th Century” (2003), Engendering China (1995–2000) and the Women’ s Studies Series (1987–1992), etc. The recent monographs include Archaeology in Mind: Spiritual Archives of New China’s People (Shanghai, 2014), Dialogue with Wang Hui: A Case Studies of Scholarism in Mainland China (1990–2011) (Beijing, 2014), and Women’s Utopia (Beijing, 2016).

Preface: ‘Allegorical Writing’ and ‘Post-Utopian Criticism’
Postscript to the Revised Edition: The Restrictions on Utopia


1 What Kinds of Stories Does Wolf Totem Narrate?: As Allegory: The Qualities and Characteristics of Wolf Totem
1 Allegory and Modern Allegory
2 Tracing the Wolf Motif
3 The Narrative Strategy of Wolf Totem
2 Why Was There Such a Wide Readership for Wolf Totem?: As Fiction: The Shift of Subject Position in the Context of Post-Modernism
1 Theme the Logic of the Grassland: Existence in Primal Nature
2 The Protagonist, the Grassland Wolf: The Spirit of Primal Freedom
3 Plot: The Story of the Wolf Cub and the Death of Freedom
4 Tragedy, the End of the Grassland: The Death of Nature
3 How Did Wolf Totem Captivate Readers?: Aesthetics: A Model Text of Postmodernist Empathy
1 The Ecosystem 119
a) Structure: Emplacement and Heterotopias
b) Rhythm: Rotation and Reversal
2 The Language of Life
a) Scenery: Action Words
b) Details: Sensuous Vocabulary

4 How Many Allegories are Contained in Wolf Totem?: The Utopian Boat: A Journey of Redemption Has a Nearly Inaccessible Destination
1 In Terms of Semiotics: How Many Meanings Lie Hidden in Wolf Totem?
2 In Terms of Linguistics: Are ‘Translation’ and ‘Mediation’ Possible?
3 In Terms of Religious Studies: How Did the Wolf become a Totem?
4 In Terms of Anthropology: Whence Human Nature? Whither Human Nature?
5 In Terms of Gender: ‘Asexual’ or ‘Sexual’?
6 In Terms of Ecology: How Much Space for Choice Do Humans still Have?
7 In Terms of Cultural Studies: In the Contest of Civilizations, Who is the Winner?
8 In Terms of Economics: What is the Distance between Labor and Power?
9 In Terms of Political Science: What Weapon Do You Use to Conquer the Grassland?
10 In Terms of Historiography: Where Does the Story of ‘Nature’ End?
11 In Terms of Philosophy: What Lies Ahead for ‘Freedom’?
12 In Terms of Folklore: Limited Use or Limited Survival?
5 How Could Wolf Totem Evoke Diametrically Opposed Moods and Opinions?: Postcolonial Criticism: Allegory is in the Self-Dissolution of ‘Thinking’
1 On Dialogue (a): War and Peace
2 On Dialogue (b): The Issue of National Character
3 On “The Lecture”: China and the World
4 The Author: A Farewell to Revolution?
6 A Brief Conclusion: The Discursive Space Within and Outside Wolf Totem: In Terms of Criticism: Interpretation and Necessary “Over-interpretation”
1 ‘Post-’ Discourse Encounters Danger While Traveling
2 The Disappearance and Return of the Second World
3 Post-Utopian Criticism and the End of the ‘Post-’