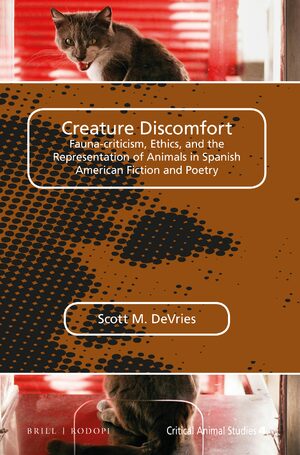 Fauna-criticism, Ethics and the Representation of Animals in Spanish American Fiction and Poetry

Author: Scott M. DeVries
In Creature Discomfort: Fauna-criticism, Ethics, and the Representation of Animals in Spanish American Fiction and Poetry, Scott M. DeVries uncovers a tradition in Spanish American literature where animal-ethical representations anticipate many of the most pressing concerns from present debates in animal studies. The author documents moments from the corpus that articulate long-standing positions such as a defense of animal rights or advocacy for liberationism, that engage in literary philosophical meditations concerning mind theory and animal sentience, and that anticipate current ideas from Critical Animal Studies including the rejection of hierarchical differentiations between the categories human and nonhuman.

Creature Discomfort innovates the notion of “fauna-criticism” as a new literary approach within animal studies; this kind of analysis emphasizes the reframing of literary history to expound animal ethical positions from literary texts, both those that have been considered canonical as well as those that have long been neglected. In this study, DeVries employs fauna-criticism to examine nonhuman sentience, animal interiority, and other ethical issues such as the livestock and pet industries, circuses, zoos, hunting, and species extinction in fictional narrative and poetry from the nineteenth century, modernista, Regional, indigenista, and contemporary periods of Spanish American literature.


All interested in the ethical representation of animals in Spanish American literature, and anyone familiar with that literature concerned to understand the way in which Critical and Traditional Animal studies may approach texts from the region.