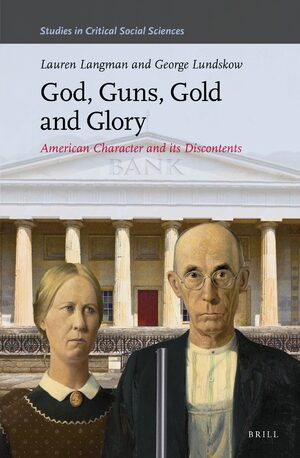 American Character and its Discontents

Authors: Lauren Langman and George Lundskow
America, beginning as a small group of devout Puritan settlers, ultimately became the richest, most powerful Empire in the history of the world, but having reached that point, is now in a process of implosion and decay. This book, inspired by Frankfurt School Critical Theory, especially Erich Fromm, offers a unique historical, cultural and characterological analysis of American national character and its underlying psychodynamics. Specifically, this analysis looks at the persistence of Puritan religion, as well as the extolling of male toughness and America's unbridled pursuit of wealth. Finally, its self image of divinely blessed exceptionalism has fostered vast costs in lives and wealth. But these qualities of its national character are now fostering both a decline of its power and a transformation of its underlying social character. This suggests that the result will be a changing social character that enables a more democratic, tolerant and inclusive society, one that will enable socialism, genuine, participatory democracy and a humanist framework of meaning. This book is relevant to understanding America’s past, present and future.

€168.00$208.00
​
Add to Cart
Lauren Langman ( PhD University of Chicago, 1969) is Professor of Sociology at Loyola University of Chicago. He has published widely in critical theory and social movements, e.g. Alienation and the Carnivalization of Society (Routledge, 2012) which he co-edited with Jerome Braun and recent volumes on hegemony and Arab Spring/Occupy.

George Lundskow (Ph.D. University of Kansas, 1999) is Professor of Sociology at Grand Valley State University. He publishes on God, Money, and Power from a class-cultural and psychoanalytic perspective and embraces work across disciplines that bring passion and insight to vital issues.
Sociologists Langman (Loyola University of Chicago) and Lundskow (Grand Valley State University) claim Erich Fromm and the Frankfurt School as their inspiration for a blistering critique of the “sinister side” of American character. They describe this aspect of American social character as "religious, industrious, independent, phallic aggressive—often racist, sexist, and xenophobic, undergirded by an authoritarian streak." Fearful white people, moved by this character, vote for plutocratic elites against their own economic interests. Yet the authors believe that the other side of American character, "premised on democratic values and egalitarian practices of caring, sharing and empathy," can be the basis of A Sane Society in the 21st Century, the title of their projected companion volume. Not meaning their book to be an objective academic work, Langman and Lundskow "make no pretense of neutrality because such pretenses often make academic work irrelevant to the real world."
B. Weston, Centre College

Langman and Lundskow’s fascinating God, Guns, Gold and Glory: American Character and its Discontents shows the profound relevance today of the ideas of Erich Fromm and thereby demonstrates that Fromm’s work deserves to be rescued from the neglect that it has suffered within the academic discipline of sociology. Langman and Lundskow apply Fromm’s theory of social character in order to analyze the historical, cultural, and socialpsychological roots of right-wing politics in America today. [...] Langman and Lundskow present a cogent argument that there is such a thing as an identifiable American national character as a distinct set of ‘‘values, mores, and reflexive narratives’’ that, indeed, characterizes a people.
Charles Thorpe (University of California-San Diego), in Contemporary Sociology, Vol. 47, No. 2, pp. 199-200.
Acknowledgements
Preface: What’s the matter with the United States?
The Fault Lies Within
Enter the Frankfurt School
Changing American Social Character: The Prelude to Socialism
Chapter Outline

3. America: Chasing the Pot of Gold
Character and Political-Economy
Back to the Past
They’re Back!
The Pitchforks are Coming!
The Rise of Predatory Banksters
Too Big to Fail, To Powerful to Jail
Spoiled by Success
Detroit Falls to the Bankster Hordes
Hostile Takeovers-The Social Dominators at Work
The Social Dominator
Summary

8. Epilogue
Resurrecting The Frankfurt School
The Resurrection of Critical Theory
Toward a Better Future

Bibliography
Index
This book will appeal to numerous social scientists, students and educated readers concerned with the present course of American society by joining traditions of American Character studies with Critical Theory.