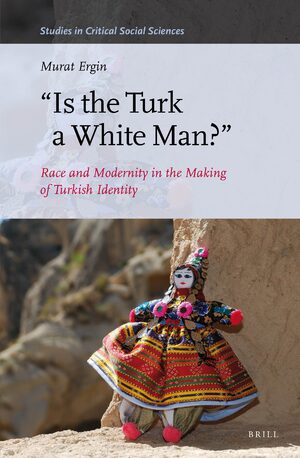 Race and Modernity in the Making of Turkish Identity

Author: Murat Ergin
In 1909, the US Circuit Court in Cincinnati set out to decide “whether a Turkish citizen shall be naturalized as a white person”; the New York Times article on the decision, discussing the question of Turks’ whiteness, was cheekily entitled “Is the Turk a White Man?” Within a few decades, having understood the importance of this question for their modernization efforts, Turkish elites had already started a fantastic scientific mobilization to position the Turks in world history as the generators of Western civilization, the creators of human language, and the forgotten source of white racial stock. In this book, Murat Ergin examines how race figures into Turkish modernization in a process of interaction between global racial discourses and local responses.
E-Book (PDF)

CHAPTER 1: WHY THIS BOOK SHOULD NOT HAVE BEEN WRITTEN
Race and the Turkish Case
Why Care About the Turkish Case?
The West = Theory; The Rest = “Mere” Case
Cases and National Boundaries

CHAPTER 3: ENCOUNTERS WITH THE “WEST”
Becoming White
The Ghosts of the Past: Ottoman Modernization and Encounters with the West
The Ottoman Interest in Race
Ziya Gökalp: The Official Ideologue of the Republic?
The Formation of the “Terrible Turk”: Western Perceptions
The Problem of Periodization

BIBLIOGRAPHY
INDEX
All interested in the history of Turkey and contemporary Turkish society, and anyone concerned with race and modernization.