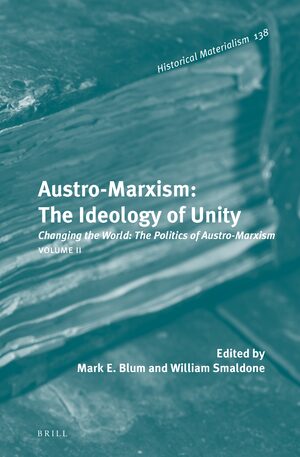 Changing the World: The Politics of Austro-Marxism

Editors: Mark E. Blum and William T. Smaldone
During the first half of the twentieth century, Austrian socialist thinkers such as Otto Bauer, Rudolf Hilferding, Karl Renner, and Max Adler emerged from and helped transform Austrian Social Democracy into one of Europe's best organized and most effective political and social movements. Equipped with extensive introductions that outline the intellectual and political background within which the Austro Marxists worked, these volumes represent the most thorough effort to date to provide a representative sampling in English of the Austro-Marxists' key theoretical ideas and their approaches to politic action. Drawing on their writings from the early twentieth century until the collapse of Austrian Socialism in the 1930s, these volumes illustrate the conceptual richness of Austro-Marxist thought and the enduring challenge that socialists faced then and now in the realization of their hopes.
E-Book (PDF)

€235.00$270.00
​
Add to Cart
Mark E. Blum, Ph.D. (1970), University of Pennsylvania, is Professor of History at the University of Louisville, Louisville, Kentucky. He published books, monographs, and articles on European socialism, including The Austro-Marxists, 1890-1918: A Psychobiographical Study (University of Kentucky, 1985), and most recently, with William Smaldone, Austro-Marxism: The Ideology of Unity, Volume I Austro-Marxist Theory and Strategy (Brill, 2016).

William Smaldone, Ph.D. (1989),SUNY at Binghamton, is Professor of History at Willamette University in Salem, Oregon. He has published monographs and articles on the history of European socialism, including, most recently, European Socialism: A Concise History with Documents (Rowman and Littlefield, 2013).
Preface

The Nationalities Programme of the Austrian Social Democratic Workers’ Party (1899)

Otto Bauer
The Russian Revolution and the European Proletariat (1917)
The German-Austrian State (1918)
One Year of Revolution (1919)
Socialisation during the Republic’s First Year (1919)
Council Democracy or Dictatorship? (1919)

Karl Renner
The Crisis of Socialism (1916)
What is Class Struggle? (1919)
On the Threshold of the Transition from Democracy to Socialism (1919)

Karl Renner
Some Experiences of Practical Class Struggle (1928)
A Different Austria. Into the Decisive Struggle! (1930)
Will Democracy Prove Itself? (1932)

These volumes would be of interest to academic libraries (servicing graduate and undergraduate students), specialists, and general readers with a serious interest in socialist history.