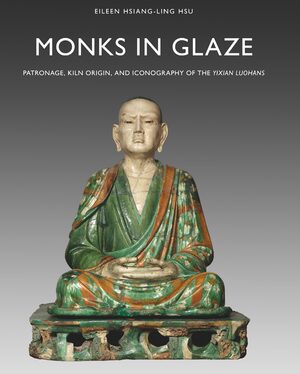 Patronage, Kiln Origin, and Iconography of the Yixian Luohans

Author: Eileen Hsiang-ling Hsu
Monks in Glaze is a complete reassessment of the famous group of large glazed ceramic sculptures known as the Yixian Luohans. Drawing upon hitherto-unknown epigraphic documents, Eileen Hsiang-ling Hsu proposes a new date (1511–1519) for the group’s production and, for the first time, identifies the kiln centre near Beijing as its birthplace.
Removed more than one hundred years ago from a massive grotto in northern China, the group’s provenance disappeared after its dispersal between 1913 and 1933. Delving into the social and economic issues of religious patronage, imperial workshop practice, and nuanced style of post-Yuan Buddhist art, Hsu convincingly shows that such a large group of masterworks were products of well-developed commercial economy of the Ming dynasty.

$139.00
​
Add to Cart
Eileen Hsiang-ling Hsu (Ph.D., 1999, Columbia University) is an independent scholar. She has taught courses in Asian art history, curated exhibitions, lectured in English and Chinese, and her numerous publications focus on epigraphy, Buddhist art, and workshop practice.
'In this thoroughly researched study, Hsu (independent scholar) traces the origin and dates of what may have been 16 Chinese luohan figures. (...) The book unrolls like a detective story as the author follows clues in the writings of early-20th-century German scholar Friedrich Perzyński—who discovered the glazed figures of the luohans in caves southwest of Beijing and acquired them for museums in Europe and North America—and then herself traveled to the caves. In the book's five chapters and five appendixes, Hsu analyzes the figures by archaeological and epigraphic records, making comparisons with Ming dynasty sancai sculpture and thus establishing new dates for the figures and rendering a detailed examination of luohans' iconography. Including 153 illustrations (most in color), endnotes, and Chinese glossary, this valuable volume will interest specialists.'
--D. K. Haworth, Carleton College, CHOICE, Vol. 54/8 (April 2017)
Summing Up: Highly recommended. Graduate students, researchers, faculty, professionals.

' Monks in Glaze is a comprehensive study, drawing on social and economic issues of religious patronage, imperial workshop practice, and style nuances of post-Yuan Buddhist art. Hsu writes well, simply and clearly, while her scholarship is immaculate: methodical, balanced and, beyond question, convincing. (...) This book should have a wide appeal, well beyond the specialist world of academics and historians of Asian art, partly because of the unsurpassed power and beauty of Luohans, themselves, and partly because it is an extraordinary story of discovery, adventure and skullduggery taking place against a background of war and the social and economic breakdown that was China in 1912.' Richard Temple, Minerva Magazine (https://www.minervamagazine.co.uk/Books_28-2_02.html)

' Monks in Glaze is scholarly in tone yet highly readable. Hsu brings to light new materials relevant to acquiring a better understanding of the history behind these unique works.(...) For the less-specialized reader, there is a lot to be learned from Hsu's study. The materials she has gathered to support her thesis of a Ming dynasty production date point to a unique confluence of events leading to the rise in Ming ceramic sculptural production (...) The reader also receives the added bonus of a complete translation from German of the original article written by Friedrich Perzyński, whose story of the removal of the Yixian luohan reads like a Hollywood movie script. Contextualized by Richard Smithies, this addendum brings home to the reader the tumultuous times within which the Yixian luohan made their way to the West, and hints at the possibility of other works still hidden in the hills.'
Karil J. Kucera, Orientations, Vol. 49/2 (2018)