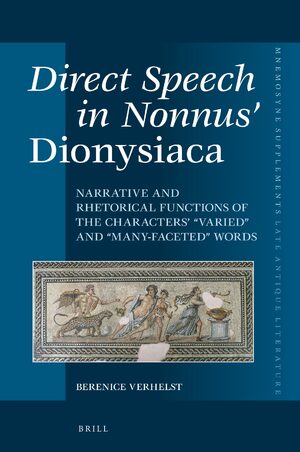 Author: Berenice Verhelst
Direct Speech in Nonnus’ Dionysiaca is the first more extensive study of the use and functions of direct speech in Nonnus’ Dionysiaca (5th century AD). Its long soliloquies and scarcity of dialogues have often been pointed out as striking characteristics of Nonnus’ epic style, but nonetheless this fascinating subject received relatively little attention.
Berenice Verhelst aims to reveal the poem’s constant interplay between the epic tradition and the late antique literary context with its clear rhetorical stamp. She focusses on the changed functions of direct speech and their implications for the presentation of the mythological story. Organized around six case studies, this book presents an in-depth analysis of a representative part of the vast corpus of the Dionysiaca’s 305 speeches.

The digital appendix to this book ( Database of Direct Speech in Greek Epic Poetry) can be consulted online at www.dsgep.ugent.be.

€138.00$151.00
​
Add to Cart
Berenice Verhelst, Ph.D. (2014), University of Ghent, is a Postdoctoral Research Fellow (FWO Flanders) at the University of Ghent. She works and publishes on late antique poetry (especially Nonnus and the so-called “epyllion” genre) and collaborates in several international projects in this area.
Contents

Introduction
Variation or Incoherence; Virtue or Vice?
Direct Speech in the Dionysiaca
Objectives and Approaches

part 1 - Epic Speech in Transformation
1 Imitation and Transformation: From Troy to India and from Medea to Morrheus
1.1 Speeches and Dialogues in the Διὸς ἀπάτη Episode
1.2 A Speech for a Speech: Apollonius Inverted
1.3 Nonnus and Quintus (or Libanius): Τίνας ἂν εἴποι λόγους;
1.4 Speech Composition and Narrative Structures
2 Types of Epic Speech: The Battle Exhortation
2.1 Defining the Corpus: The Epic and the Historiographical Tradition
2.2 Exhortations in Nonnus: Subtypes of the Battle Exhortation
2.3 Exhortative Topoi and Recurring Motifs in Nonnus
2.4 Selected Examples: Untraditional Exhortations in Nonnus
2.5 Epic and Rhetorical Conventions
3 Speeches within Speeches
3.1 Potential τις-Speech in Nonnus: A Homeric Device Revived
3.2 More Hypothetical Speeches
3.3 Hypothetical Speech, a “Nonnian” Device

part 2 - Rhetoric and Narrative
4 The Rhetoric of Deception: Persuasive Strategies
4.1 Deceptive Speeches
4.2 Speaking in Disguise: ἦθος, πάθος and Authority
4.3 Hera’s Deception of Semele: A Case Study
4.4 True or False? As Long as It is Artful
5 Ecphrastic Ethopoeae and the Perspective of the Text-Internal Observer
5.1 Suddenly Appearing Characters and Their Speeches
5.2 Looking through the Text-Internal Observer’s Eyes
5.3 Comments from Above
5.4 A Double Role
6 Rhetoric of Seduction and Failure of Communication in the Beroe Episode
6.1 Amatory Rhetoric: The Case of the παρθένοι φυγόδεμνοι
6.2 Beirut and Beroe
6.3 Dionysus and Poseidon Courting Beroe: A Series of Amorous Approaches
6.4 Fruitless Metaphors and Arguments Unheard

Appendix - Summary of the Dionysiaca

All interested in late antique poetry, especially in Nonnus of Panopolis, as well as anyone interested more generally in the Greek epic tradition and the influence of rhetoric on narrative poetry. 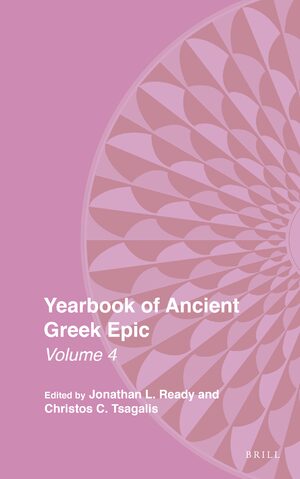 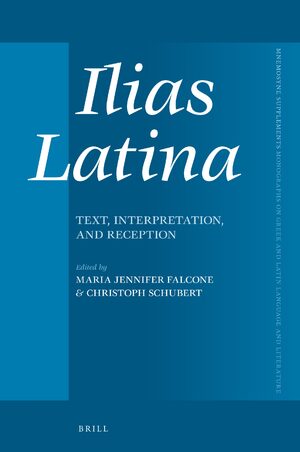 Brill's Companion to the Reception of Plutarch 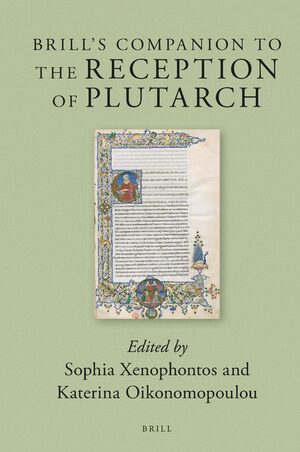