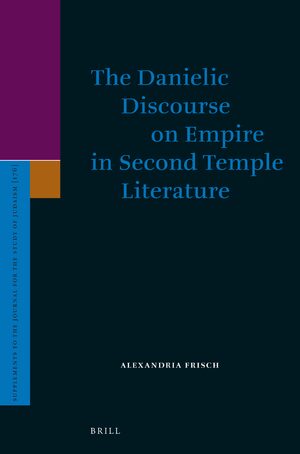 The Danielic Discourse on Empire in Second Temple Literature

Author: Alexandria Frisch
In The Danielic Discourse on Empire in Second Temple Literature, Alexandria Frisch asks: how did Jews in the Second Temple period understand the phenomenon of foreign empire? In answering this question, a remarkable trend reveals itself—the book of Daniel, which situates its narrative in an imperial context and apocalyptically envisions empires, was overwhelmingly used by Jewish writers when they wanted to say something about empires. This study examines Daniel, as well as antecedents to and interpretations of Daniel, in order to identify the diachronic changes in perceptions of empire during this period. Oftentimes, this Danielic discourse directly reacted to imperial ideologies, either copying, subverting, or adapting those ideologies. Throughout this study, postcolonial criticism, therefore, provides a hermeneutical lens through which to ask a second question: in an imperial context, is the Jewish conception of empire actually Jewish?
Hardback

€120.00$132.00
Hardback
Add to Cart
Alexandria Frisch, Ph.D. (2013), New York University, is Visiting Assistant Professor in Jewish Studies at Ursinus College. Her publications focus on concepts of power, both imperial and divine, in Second Temple literature.
Certainly the book written by Frisch is a significant contribution to the study of the concept of empire in Jewish thought and extremely helpful to anyone interested in the issue of empire and Jews. Aleksander Michalak, Reviews of the Enoch Seminar, 2018
Contents

PART 2: The Book of Daniel

Bibliography
Ancient Sources Index
Subject Index
Anyone interested in how ancient Jewish thought was shaped by interactions with foreign empires and, more broadly, those interested in the use of postcolonial criticism to read biblical and post-biblical texts.