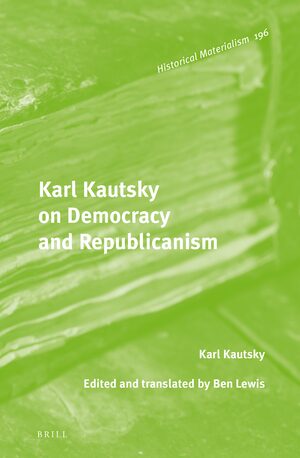 Karl Kautsky on Democracy and Republicanism

Editor: Ben Lewis
Author: Karl Kautsky
Once deemed ‘the pope of Marxism’, Karl Kautsky (1854–1938) was the leading theoretician of the German Social Democratic Party and one of the most prominent public intellectuals of his time. However, during the twentieth century a constellation of historical factors ensured that his ideas were gradually consigned to near oblivion. Not only has his political thought been dismissed in non-Marxist historical and political discourse, but his ideas are equally discredited in Marxist circles.
This book aims to rekindle interest in Kautsky’s ideas by exploring his democratic-republican understanding of state and society. It demonstrates how Kautsky’s republican thought was positively influenced by Marx and Engels – especially in relation to the lessons they drew from the experience of the Paris Commune.
E-Book


Part 2 Karl Kautsky, The Republic and Social Democracy in France (1905)


Appendix: Synoptic Overview of the Drafts of the Erfurt Programme (1891) Bibliography Index
All interested in democratic and republican thought, the history of Marxism, referenda and elections, and the nature of the French Third Republic.