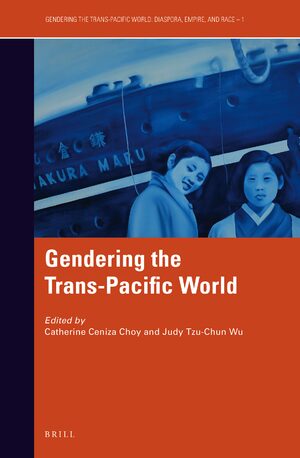 Editors: Catherine Ceniza Choy and Judy Tzu-Chun Wu
As the inaugural volume of the new Brill book series Gendering the Trans-Pacific World: Diaspora, Empire, and Race, this anthology presents an emergent interdisciplinary and multidisciplinary field that highlights the inextricable link between gender and the trans-Pacific world. The anthology features twenty-one chapters by new and established scholars and writers. They collectively examine the geographies of empire, the significance of intimacy and affect, the importance of beauty and the body, and the circulation of culture. This is an ideal volume to introduce advanced undergraduate and graduate students to trans-Pacific Studies and gender as a category of analysis.
E-Book (PDF)

€105.00$121.00
​
Add to Cart
Catherine Ceniza Choy is professor of Asian American and Asian Diaspora Studies in the Department of Ethnic Studies at the University of California, Berkeley. She is the author of Empire of Care: Nursing and Migration in Filipino American History (Duke University Press, 2003) and Global Families: A History of Asian International Adoption in America (New York University Press, 2013).

Judy Tzu-Chun Wu, Ph.D. (1998), Stanford University, is professor and chair of Asian American Studies at the University of California, Irvine. She authored Dr. Mom Chung of the Fair-Haired Bastards: The Life of a Wartime Celebrity (University of California Press, 2005) and Radicals on the Road: Internationalism, Orientalism, and Feminism during the Vietnam Era (Cornell University Press, 2013).

Part II: Geographies of Empire
4. Rethinking the Sexual Geography of American Empire in the Philippines: Interracial Intimacies in Mindanao and the Cordilleras, 1898–1921, by Tessa Ong Winkelmann
5. A Fascist Triangle or a Rotary Wheel: The Sino-Japanese War and the Gendered Internationalisms of Sylvia Pankhurst and Carlos Romulo, by Erika Huckestein and Mark L. Reeves
6. Moving Within Empires: Korean Women and Trans-Pacific Migration, by Ji-Yeon Yuh
7. Re-franchising Women of Hawaiʻi, 1912–1920: The Politics of Gender, Sovereignty, Race, and Rank at the Crossroads of the Pacific, by Rumi Yasutake
8. Currencies of U.S. Empire in Hawaiʻi’s Tourism and Prison Industries, by Liza Keānuenueokalani Williams

Part III: Intimacies and Affect
9. The Sexualized Child and Mestizaje: Colonial Tropes of the Filipina/o, by Gladys Nubla
10. “Ashamed of Certain Japanese”: The Politics of Affect in Japanese Women’s Immigration Exclusion, 1919–1924, by Chrissy Yee Lau
11. Gendered Adoptee Identities: Performing Trans-Pacific Masculinity in the 21st Century, by Kimberly McKee
12. Up in the Air: Circuits of Transnational Asian and Asian American Mothering, by Miliann Kang

Part IV: Beauty and the Body
13. Pageant Politics: Tensions of Power, Empire, and Nationalism in Manila Carnival Queen Contests, by Genevieve Clutario
14. “Golden Lilies” across the Pacific: Footbinding and the American Enforcement of Chinese Exclusion Laws, by Fang He
15. Traces of Empires in Breast Cancer in South Korea and the Trans-Pacific, by Laura C. Nelson
16. Graphical and Ethical Spectatorship: Human Trafficking in Stanford Graphic Novel Project’s From Busan to San Francisco and Mark Kalesniko’s Mail Order Bride, by Stella Oh

Part V: Culture and Circulation
17. Performing between Two Empires: Colonial Modernity and the Racialized Politics of Filipino Masculinity in Okinawa and Japan, by Nobue Suzuki
18. A Careful Embrace: Race, Gender, and the Consumption of Hawaiʻi and the South Pacific in Mid-Century Los Angeles, by Shawn Schwaller
19. We Are Pacific Men, by Craig Santos Perez
20. Gendering the K-Vampire, by Hyungji Park
21. Through a Trans-Vietnamese Feminist Lens: The Cinemas of Vietnam and the Diaspora, by Lan Duong