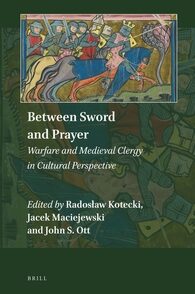 Between Sword and Prayer

€149.00$172.00
​
Add to Cart
Radosław Kotecki, Ph.D. (2013), Kazimierz Wielki University in Bydgoszcz, Poland, is Adjunct at that university. He has published essays on medieval church and cultural history, and is co-editor of several volumes, including Ecclesia et Violentia (Cambridge Scholars, 2014).
Jacek Maciejewski, Ph.D. (1996), is full Professor at Kazimierz Wielki University, Poland. He has published extensively on the Polish medieval episcopacy. He is the author of three monographs, including Episkopat polski doby dzielnicowej, 1180-1320 (Societas Vistulana, 2003), and Adventus episcopi (UKW, 2013)
John S. Ott, Ph.D. (1999), Stanford University, is Professor of History at Portland State University. He is co-editor of The Bishop Reformed (Ashgate, 2007), and the author of Bishops, Authority and Community in Northwestern Europe, c.1050-1150 (Cambridge University Press, 2015).

''The question of militant or arms-bearing clergy remained for many decades the preserve of scholars focused on the German kingdom and, to a lesser extent, the Carolingian Empire. The last few years, however, have seen the publication of a spate of books that have examined militant clergy in other contexts. [...] The volume under review here, which includes essays by both Nakashian and Gerrard, continues the process of broadening the historical investigation of clergy who were involved in the conduct of war. [...] This volume provides a valuable array of perspectives on the problem of clerical militancy across much of Europe over a period of many centuries.One of the prominent themes that emerges from these studies is the great complexity and diversity of Christian thought regarding whether and when it was licit for clerics to shed blood directly, or to participate in other ways in military campaigns
David S. Bachrach, in Speculum, 94/2 (2019).

"In their edited volume, Radosław Kotecki, Jacek Maciejewski, and John S. Ott deserve congratulations for bringing together such a broad sample of scholarship on the subject of the involvement of medieval clerics in military affairs; those congratulations need at least be double for the authors of the chapters for taking the time to do new and important work rooted in research, rather than succumb to the pressure of doing empirically-suspect but popularly-facing trendy writing. The volume’s contents are considerable and make a clear case that, whatever the legal or social impacts might be, clerics were involved in the processes of warfighting broadly across Medieval Latin Christendom; this is itself is an achievement, made all the more impressive by the detail of the individual chapters […] Kotecki, Maciejewski, and Ott deserve considerable thanks for their work to collect so many quality scholars, and Brill deserve praise for putting these chapters together in one volume''. Kyle Lincoln, in De Re Militari, August 2020.
Acknowledgements
List of Abbreviations
List of Contributors

5 Orderic Vitalis and Henry of Huntingdon: Views of Clerical Warfare from Inside and Outside the Cloister
Craig M. Nakashian

6 Ungirded for Battle: Knightly Conversion to Monastic Life and the Making of Weapon-Relics in the Central Middle Ages
Katherine Allen Smith

9 Italian Bishops and Warfare during the Investiture Contest: The Case of Parma
Robert Houghton

10 Lions and Lambs, Wolves and Pastors of the Flock: Portraying Military Activity of Bishops in Twelfth-Century Poland
Radosław Kotecki

11 A Bishop Defends His City, or Master Vincentius’s Troubles with the Military Activity of His Superior
Jacek Maciejewski

12 In the Service of Bellona: Images of “Militant Abbots” in Late Twelfth- and Early Thirteenth-Century Historiography of St. Gall (continuationes II and III of Casuum Sancti Galli)
Monika Michalska

13 Bishops and Abbots at War: Some Aspects of Clerical Involvement in Warfare in Twelfth- and Early Thirteenth-Century Livonia and Estonia
Carsten Selch Jensen

14 Tending the Flock: Clergy and a Discourse of War in the Wider Hinterland of the Eastern Adriatic during the Late Twelfth and Thirteenth Centuries
Ivan Majnarić

15 “Freedom is the greatest thing”: Bishops as Fighters for Freedom in Fifteenth-Century Sweden
Anna Waśko

16 The Evolution of Latin Canon Law on the Clergy and Armsbearing to the Thirteenth Century
Lawrence G. Duggan

All interested in clerical involvement in warfare in the context of medieval culture, religion, literature, and law.