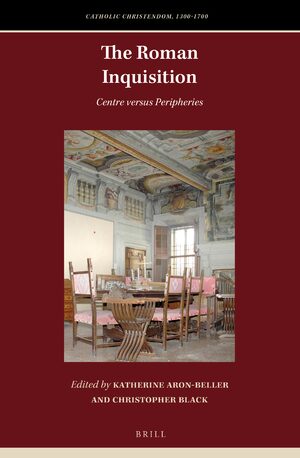 Editors: Katherine Aron-Beller and Christopher Black
In The Roman Inquisition: Centre versus Peripheries, two inquisitorial scholars, Black who has published on the institutional history of the Italian Inquisitions and Aron-Beller whose area of expertise are trials against Jews before the peripheral Modenese inquisition, jointly edit an essay collection that studies the relationship between the Sacred Congregation in Rome and its peripheral inquisitorial tribunals. The book analyses inquisitorial collaborations in Rome, correspondence between the Centre and its peripheries, as well as the actions of these sub-central tribunals. It discusses the extent to which the controlling tendencies of the Centre filtered down and affected the peripheries, and how the tribunals were in fact prevented by local political considerations from achieving the homogenizing effect desired by Rome.
E-Book

€139.00$160.00
​
Add to Cart
Katherine Aron-Beller, Ph.D (Haifa, 2002) is lecturer in Jewish History at the Hebrew University of Jerusalem and at Tel Aviv University. Her first book Jews on Trial: The Papal Inquisition in Modena 1598-1638 (Manchester University Press) was published in 2011.

Christopher Black, B.Litt, (Oxford 1967), is Emeritus Professor of Italian History, Glasgow University. His monographs include Italian Confraternities in the Sixteenth Century (1989), Church, Religion and Society in Early Modern Italy (2004), and most recently The Italian Inquisition (2009).

I) Collaboration at the centre: The Congregation of the Holy Office in Rome
Irene Fosi: “Conflict and Collaboration: The Inquisition in Rome and the Papal Territories (1550-1750).”
Kimberly Lynn: “From Madrid to Rome: Communication, Collaboration, and Competition between the Roman and Spanish Inquisitions.”
II) Correspondence between the Centre and the Peripheries
Christopher F. Black: “Relations between Inquisitors in Modena and the Roman Congregation in the seventeenth century”.
Giuliana Ancona and Dario Visintin “Centre and Periphery: The Correspondence between the Congregation of the Holy Office and the Inquisition in Fruili between 1578 and 1653.”

III) The Peripheries in action
Jonathan Seitz “Interconnected inquisitors: Circulation and networks among outer peripheral tribunals.”
Vincenzo Lavenia “The Holy Office in the Marcch of Ancona: Institution and crimes.”
Tom Deutscher “The Roman Inquisition at Novara in the century of Enlightenment.”

IV) Offences in the Peripheries
Federico Barbierato “Ripped Shoes and Books of Magic: Practice and Limits of Inquisitorial Control on the Circulation of Forbidden Books in Venice between the Sixteenth and Seventeenth Centuries.
Giorgio Caravale “‘Tacitly denied.’ Inquisition, Heresy and Dissimulation in the Kingdom of Naples.”
Giorgos Plakotos “Interrogating Conversion: Discourses and Practices in the Venetian Inquisition (16th-17th centuries).”