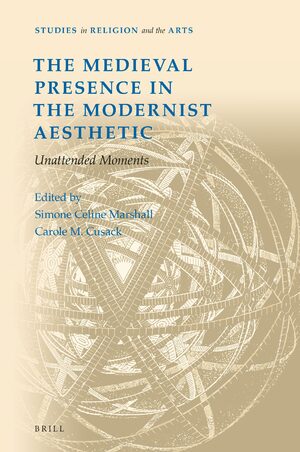 The Medieval Presence in the Modernist Aesthetic

€116.00$134.00
​
Add to Cart
Simone Celine Marshall, PhD (2005), University of Sydney, is Senior Lecturer in English and Linguistics at the University of Otago. She recently published ‘Virginia Woolf’s To The Lighthouse and the Medieval Mystical Tradition of Pseudo-Dionysius,’ Literature & Aesthetics 27.1 (2017), 153-170.

Carole M. Cusack, PhD (1996), University of Sydney, is Professor of Religious Studies at that university. She has published monographs including Invented Religions: Imagination, Fiction and Faith (2010) and The Sacred Tree: Ancient and Medieval Manifestations (2011).

Ezra Pound's Medieval Classicism: The Spirit of Romance and the Debt to Philology

The Aristotelian Crescent: Medieval Arabic Philosophy in the Poetics of Ezra Pound

Lancelot and Guinevere in the Inter-War Period: The Medievalisms of Evelyn Waugh's A Handful of Dust and Ezra Pound's Canto

All interested in literary Modernism, Medieval Studies, and the reception of the Middle Ages in modernity or Medievalism, and in the relations of literature and culture more broadly.