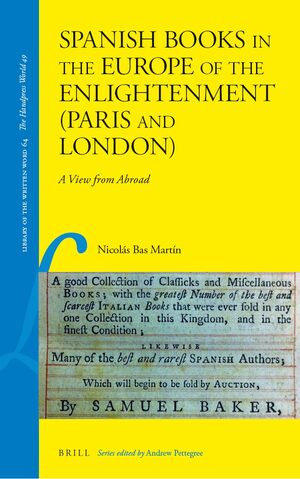 Spanish Books in the Europe of the Enlightenment (Paris and London)

A View from Abroad

Author: Nicolás Bas Martín
In Spanish Books in the Europe of the Enlightenment (Paris and London) Nicolás Bas examines the image of Spain in eighteenth-century Europe, and in Paris and London in particular. His material has been scoured from an exhaustive interrogation of the records of the book trade. He refers to booksellers’ catalogues, private collections, auctions, and other sources of information in order to reconstruct the country’s cultural image. Rarely have these sources been searched for Spanish books, and never have they been as exhaustively exploited as they are in Bas’ book.
Both England and France were conversant with some very negative ideas about Spain. The Black Legend, dating back to the sixteenth century, condemned Spain as repressive and priest-ridden. Bas shows however, that an alternative, more sympathetic, vision ran parallel with these negative views. His bibliographical approach brings to light the Spanish books that were bought, sold and ultimately read. The impression thus obtained is likely to help us understand not only Spain’s past, but also something of its present.
E-Book (PDF)