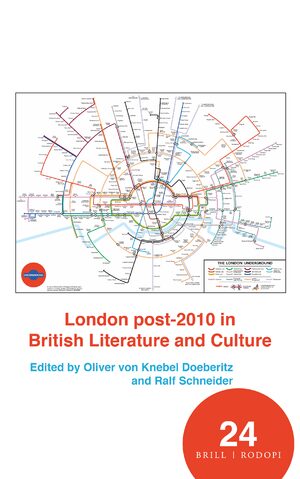 Series:  Spatial Practices, Volume: 24
Editors: Oliver Lindner and Ralf Schneider
London post-2010 in British Literature and Culture explores cultural and literary representations of London since around 2010 and focuses on a period in which a string of celebratory national and global media events, but also riots and anti-capitalist protests have cemented London’s status as a paradigmatic world city.

This collection of articles brings together a wide variety of topics, such as the 2011 London riots, the London Olympics of 2012, royal festivities, the Tube anniversary, memorials, and London in recent novels and blockbuster films. The contributions look at the way in which cultural and literary texts articulate competing versions of the contemporary city, oscillating between either supporting or subverting the hegemonic narrative of London as a place of cosmopolitan harmony and inclusion.

€110.00$127.00
​
Add to Cart
Oliver von Knebel Doeberitz is Professor of British Cultural Studies at the University of Leipzig, Germany. His research interests and publications explore British youth cultures and 18th-century culture, including Matters of Blood. Defoe and the Cultures of Violence (Winter, 2010).

Ralf Schneider is Professor of British Literary and Cultural Studies at Bielefeld University, Germany. He has published on the theory and analysis of literary character, cognitive narratology and a variety of topics in British literary and cultural history.