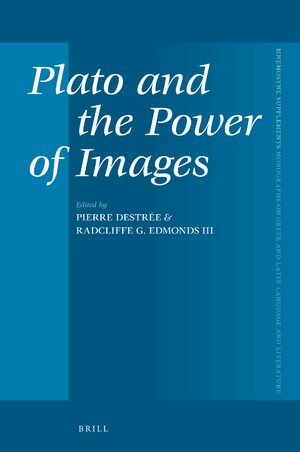 Plato and the Power of Images

Series:  Mnemosyne, Supplements, Volume: 405
Editors: Radcliffe G. Edmonds III and Pierre Destrée
Plato is well known both for the harsh condemnations of images and image-making poets that appear in his dialogues and for the vivid and intense imagery that he himself uses in his matchless prose. Through their resemblance to true reality, images have the power to move their viewers to action and to change themselves, but because of their distance from true reality, that power always remains problematic. Two recurrent problems addressed here are how an image resembles what it represents and how to avoid mistaking that image for what it represents. Plato and the Power of Images comprises twelve chapters on the ways Plato has used images, and the ways we could, or should, understand their status as images.
E-Book (PDF)

$147.00
​
Add to Cart
Radcliffe G. Edmonds III, PhD (1999) University of Chicago, is the Paul Shorey Professor of Greek at Bryn Mawr College. He has published on Greek religion, myth, and philosophy, including Myths of the Underworld Journey (Cambridge, 2004) and Redefining Ancient Orphism (Cambridge, 2013).

Pierre Destrée is Associate Research Professor at the University of Louvain where he teaches ancient philosophy. He has published widely on Greek ethics and aesthetics, and has co-edited numerous volumes, such as Plato and the Poets (Brill, 2011), Plato and Myth (Brill, 2012), and The Blackwell Companion to Ancient Aesthetics (Wiley, 2015).

Contributors are: Elizabeth Belfiore, Douglas Cairns, Radcliffe Edmonds, Andrew Ford, Francisco Gonzalez, Grace Ledbetter, Alex Long, Christopher Moore, Kathryn Morgan, Penelope Murray, Olivier Renaut, Gerd Van Riel.
"This book is a very worthy successor to the previous two volumes of the series and a valuable addition to the bookshelf of anyone interested in exploring Plato's expert use of images despite his ambivalence toward them. While the chapters of the volume can be read for profit individually, it is clear that its authors were given the opportunity to read and cross- reference each other's essays before submitting their final drafts, which most of them took advantage of, thus enhancing the collaborative feel of the book without sacrificing the self-sufficiency of each contribution." Brett Robbins, San Diego State University, Bryn Mawr Classical Review 2018.05.20
List of Contributors Introduction: The Power—and the Problems—of Plato’s Images   Pierre Destrée and Radcliffe Edmonds Alcibiades’ Eikôn of Socrates and the Platonic Text: Symp. 215a–222d   Andrew Ford The Image of Achilles in Plato’s Symposium   Elizabeth Belfiore The Power of a Beautiful Image in Plato and the Poets: Infatuation or Transcendence?   Francisco Gonzalez Putting Him on a Pedestal: (Re)collection and the Use of Images in Plato’s Phaedrus   Radcliffe Edmonds Images of Oneself in Plato   Christopher Moore Perspectivism in Plato’s Views of the Gods   Gerd Van Riel The Power of Plato’s Cave   Grace Ledbetter Political Images of the Soul   Olivier Renaut The Ship of State and the Subordination of Socrates   A.G. Long Plato’s Goat-Stags and the Uses of Comparison   Kathryn Morgan Poetry and the Image of the Tyrant in Plato’s Republic   Penelope Murray The Tripartite Soul as Metaphor   Douglas Cairns Index
Scholars and advanced students interested in Plato’s writing, in the intersection of philosophy and literature, in image and metaphor, or in images in Plato’s Symposium, Phaedrus, Republic, and other dialogues.