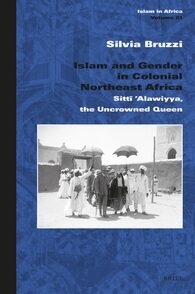 Author: Silvia Bruzzi
In Islam and Gender in Colonial Northeast Africa, Silvia Bruzzi provides an account of Islamic movements and gender dynamics in the context of colonial rule in Northeast Africa. The thread that runs through the book is the life and times of Sittī ‘Alawiyya al-Mīrġanī (1892-1940), a representative of a well-established transnational Sufi order in the Red Sea region. Silvia Bruzzi gives us not only a social history of the colonial encounter in the Eritrean colony, but also a wider historical account of supra-regional dynamics across the Red Sea, the Ethiopian hinterland, and the Mediterranean region, using a wide range of fragmentary historical materials to make an important contribution towards filling the gap that currently exists in women's and gender history in Muslim societies.
E-Book (PDF)

€105.00$122.00
​
Add to Cart
Silvia Bruzzi, (PhD 2011) is a Researcher at the Chaire d'Études Africaines Comparées (EGE Rabat). She was formerly a research fellow at the Institut Émilie du Châtelet and a visiting researcher at the Centre for Middle Eastern Studies, University of Bergen. She has also taught African and Middle Eastern History at the University of Bologna, the University of Padova and the École des Hautes Études en Sciences Sociales (EHESS – Paris). She specialises in Islam and gender in the colonial context.
Acknowledgements
List of Illustrations
A Note on Transliteration and Dates
Transliteration List
Introduction
Sufism, Colonialism and Gender Dynamics
Sufism and the Female Body

6 Growing Visibility in the Political Arena
Women’s Bodies, Photography, and Colonialism
Growing Popularity Broadcast through Visual Media
Visibility, Visuality and Power in Portraits of the Šarīfa

Bibliography
Index
All interested in the social history of colonial Africa, the study of Islamic movements, and the broader subject of gender and religion.