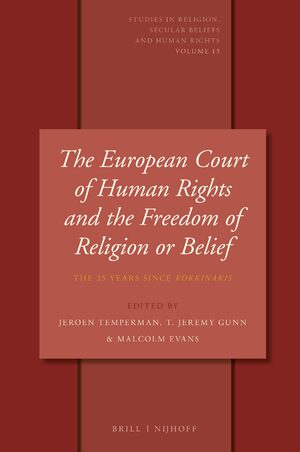 The 25 Years since Kokkinakis

Editors: Jeroen Temperman, T. Jeremy Gunn and Malcolm D. Evans
As the tensions involving religion and society increase, the European Court of Human Rights and the Freedom of Religion or Belief is the first systematic analysis of the first twenty-five years of the European Court's religion jurisprudence. The Court is one of the most significant institutions confronting the interactions among states, religious groups, minorities, and dissenters. In the 25 years since its first religion case, Kokkinakis v. Greece, the Court has inserted itself squarely into the international human rights debate regarding the freedom of religion or belief. The authors demonstrate the positive contributions and the significant flaws of the Court's jurisprudence involving religion, society, and secularism.
E-Book

€270.00$324.00
​
Add to Cart
Jeroen Temperman is Professor of International Law and Religion at Erasmus School of Law, Erasmus University Rotterdam, Netherlands. He is also the Editor-in-Chief of the journal Religion & Human Rights and a member of the Organization for Security and Cooperation in Europe’s Panel of Experts on Freedom of Religion or Belief. He has authored, among other books, Religious Hatred and International Law (Cambridge University Press, 2016) and State–Religion Relationships and Human Rights Law (Martinus Nijhoff Publishers, 2010) and edited Blasphemy and Freedom of Expression (Cambridge University Press, 2017) and The Lautsi Papers (Martinus Nijhoff Publishers, 2012).

T. Jeremy Gunn is University Professor at the Université Internationale de Rabat. His work focuses particularly on the interrelationship among religion, law, and politics. Among his publications are No Establishment of Religion: America’s Original Contribution to Religious Liberty (ed. with John Witte, Jr.) (Oxford, 2012) and Spiritual Weapons: The Cold War and the Forging of an American National Religion (Praeger, 2009).

Sir Malcom Evans, KCMG is Professor of Public International Law at Bristol University. He has published widely the protection of the freedom of religion or belief, including Religious Freedom and International Law (Cambridge, 1997) and The Changing Nature of Religious Rights (Oxford, 2015).
Contributors
Table of Legislation
Table of Cases


1 Pre- KokkinakisCase Law of the European Court of Human Rights: Foreshadowing the Future
Carolyn Evans
2 The Freedom of Religion or Belief in the since Kokkinakisor “Quoting Kokkinakis”
Malcolm Evans

All concerned about legal responses to conflicts involving religion and society in contemporary Europe and the world.