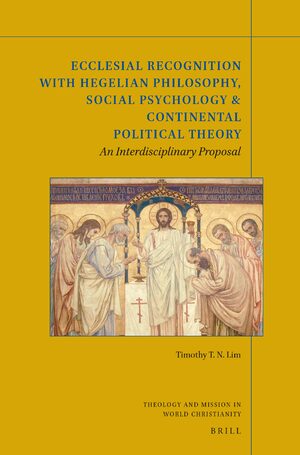 Author: Timothy T.N. Lim
Ecclesial Recognition proffers a framework for churches to accept the legitimacy and authenticity of each other as the Church in the dialogical process towards fuller communion. Typically, ‘recognition’ and its reception investigate theologically the sufficiency of creeds as ecumenical statements of unity, the agreeability of essential sacramentality of the church, and the recognition of its ministries as the churches’ witness of the gospel. This monograph conceives ecclesial recognition as an intersubjective dynamics of inclusion and exclusion amid identity formation and consensus development, with insights from Hegelian philosophy, group social psychology, and the Frankfurt School Axel Honneth’s political theory. The viability of this interdisciplinary approach is demonstrated from the French Dominican Yves Congar’s oeuvre, with implications for intra-Communion and inter-Church relations.

"Lim masterfully argues for the viability of an interdisciplinary approach to ecumenical recognition within communities, among churches, and in their common pastoral mission.” - Fr. and Professor Radu Bordeianu, Duquesne University, and Orthodox theologian, Representative of the Greek Orthodox Metropolis of Pittsburgh, and Assistant Priest of Holy Trinity Greek Orthodox Church in Pittsburgh.

“I find Dr. Lim's work a solid and necessary contribution to ecumenical work around the world.” - Rev. Dr. and Professor Dominick D. Hanckle, Regent University, and priest of the Communion of Evangelical Episcopal Churches.

“With penetrating analysis and creative suggestions, this monograph takes the talk about ecumenical recognition in a new level.” - Professor Veli-Matti Kärkkäinen, University of Helsinki.

"In the final analysis, this is a positive contribution to the labor of ecumenical dialogue by a promising young scholar that deserves to be read and studied closely. - Barry Harvey, Baylor University, in: Horizon 45:2 (2018), pp. 479-480.

"Dr Timothy Lim sheds some light on that seemingly immovable object to deeper ecclesial recognition, the lack of reception of ecumenical dialogue, by his extensive illumination of the ‘non-theological factors [that] impact the churches’ ecumenical recognition of each other.’ Dr Lim examines philosophical recognition theory, group social psychology and political recognition theory to analyse the non-theological impasses confronting the whole ecumenical movement. The idea that traditional convergence texts may serve, at least at some point in the process, to entrench existing positions vis-a-vis the ‘other’ potentially alters the future course of how bilateral dialogue is conducted." - Rev. Dr. Trevor Hoggard, Director English-speaking Ministries, Methodist Church of New Zealand.

"At a time when the ecumenical movement is at a crossroads—or even going backwards—Timothy Lim’s monograph represents a much-needed breath of fresh air intended to carry us forwards. Painting a clear picture of the nature of the unity we seek and the road traveled thus far, Lim proposes an interdisciplinary turn to the ecumenical process by making use of a broad range of recognition theories from various academic disciplines. Engaging important theological, socio-political, and psychological resources, Lim masterfully argues for the viability of an interdisciplinary approach to ecumenical recognition within communities, among churches, and in their common pastoral mission. This volume represents a masterful contribution to the ecumenical movement." - Professor Radu Bordeianu, Duquesne University.

"Timothy Lim issues a bold challenge to the churches: to get serious about visible unity. His interdisciplinary approach exposes the roots of the churches’ resistance to taking the final steps toward full recognition of one another. The result is a provocative call to Christians to re-examine not only their doctrines, but everything that keeps “us” from “them.” This book makes an important contribution to ecumenical ecclesiology." - Professor Sandra Beardsall, St Andrew’s College, Canada.

"I find Dr. Lim's work a solid and necessary contribution to ecumenical work around the world. Mutual recognition is the next step to helping the body of Christ heal and see in one another the common ground not only as fellow Christians but as legitimate ecclesial bodies with the same authority. Without it, one might wonder what direction ecumenical work might take. As someone who has worked as an ecumenical officer and as a co-pastor of an ecumenical community I am acutely aware of the need to implement Dr. Lim's finding in ecumenical activity. Additionally, as a psychologist, I appreciate Dr. Lim's use of psychological research as part of understanding how mutual recognition can move forward." - Professor Dominick D. Hanckle, Regent University.

“Provocative ideas with interesting implications. Connecting the social understanding of what it means to have recognition, the socio-political implications of recognition and contemporary ecumenical theology raises substantive issues for ecclesiology and the ecumenical movement.” - Rev. Dr. Michael H. Montgomery, Chicago Theological Seminary.

“Ecclesial recognition is not a simple process. Dr. Timothy Teck Ngern Lim explores the issue in a wide-ranging fashion, showing superb command of his intellectual resources. It would be my hope that those involved in ecumenical endeavors will draw insight and support from his work.”
— Professor Paul Lakeland, Fairfield University.

“Lim’s ground-breaking book provides a useful guide through the maze of paradigms for ecumenical convergence as well as a bold constructive synthesis of Congar’s vision of God’s gift of unity and a socio-political paradigm for its human outworking….a timely help for the churches as they remember their connections with the Western ecclesial divisions of the sixteenth century.” - Rev. Dr. Steven R. Harmon, Garder-Webb University School of Divinity.

Bibliography
Index
Expected readers are philosophers, ecumenists, theologians, ecclesiastical/church leaders, and students interested in the relationship between churches/communions, scholars of recognition in the human sciences: philosophy, psychology, and political studies.