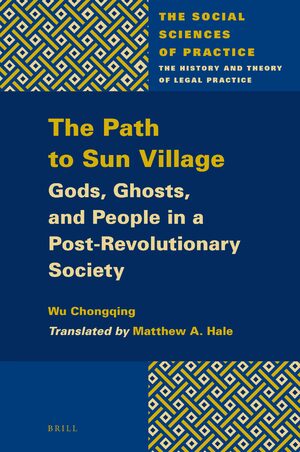 The Path to Sun Village

Gods, Ghosts, and People in a Post-Revolutionary Society

Author: Chongqing Wu
This book is a product of over ten years of work. It addresses intermarriage circles, transformations of customs, the rise and fall supernatural forces, power relations among gods, ghosts and people in “synchronic communities,” and tongxiangtongye (same hometown, same industry) economies based on rural sociocultural networks in the author’s native Sun Village in Putian. The author explores the details of microhistory by examining changes and continuities in everyday life to show the grand through the minute.
This exciting book possesses important theoretical significance, including reflections on binary frameworks such as state vs. society and tradition vs. modernity or revolution, along with new arguments about commonly used concepts such as “the cultural nexus of power” and “the hollowing-out of the rural.”

€171.00$197.00
​
Add to Cart
Wu Chongqing, Ph.D. (1991), Sun Yat-sen University, is Professor in the Department of Philosophy at that university, Director of South China Rural Research Centre, and Editor-in-Chief of Open Times. He has edited Mapping China: Peasants, Migrant Workers and Informal Labor (Brill, 2016).
Preface: A Village Path alongside China’s Highway of Development
List of Illustrations

2 The Realms of Yin and Yang
Part 1: Synchronic Communities: Gods, Ghosts, and People in a Post-revolutionary Era
From the Imperial to the Post-revolutionary Era
“We are Both Wretched Vagabonds in a Strange Land”
“Fallen to the Earth and Crushed to Dust, Only the Fragrance Remains”
When the Boundary between Yin and Yang is Breached: The Persistence of Affective Bonds between Ghosts and the Living
Synchronic Communities
Appendix to Part 1 of Chapter 2
part 2: Efficacy Depending on Faith: The Scope and Cycles of Tongji Power
The Vast Distance between Heaven and the Living
“My Identity as a Woman”
Preference for Secular over Supernatural Decision-Making
The Authority of Each Medium Lasts Two or Three Years
Part 3: Pretending that Gods Exist: Relations between People and Gods in Collective Rituals
Block Divination
Yuanxiao at Yongjin Temple
Welcoming the Gods
“Going Out to Run around the Territory”
“Running Across the Arena” and “Calming Down to Dismount”
“Selecting the Next Year’s Ritual Heads”
Distributing “Boy Biscuits”
The Utilitarianization of Supernatural Relations in Collective Rituals
Part 4: A Thin Interface: The “Balanced Rationality” among Gods, People, and Horses
Keeping Pace to Entertain Gods: From “Using Horses for Work” to “Using Horses for Ritual”
The Tracks of a Thousand Troops and Ten Thousand Horses: “Horse Agents” and “Horse-Leaders”
In the Spring, Hooves Gallop Gaily: Horse-Leaders, Horse Markets, and Clients during Yuanxiao
Those on Horseback Cannot See the Situation on the Ground: Horse-Leaders, Horses, and Gods
Society and Culture as Matrix

3 Building Roads: “The Cultural Nexus of Power”
Accounting and the State
The Weakening of Popular Authority before 1949
Political Consolidation and the Resurgence of Religious Authority (1949–1985)
The Interaction between Popular Authorities and State Brokers (1986 to the Present)

4 “Beyond the Boundary”: A Countermovement to the Hollowing-out of Rural China
Social Networks in a Peripheral Region
From Periphery to Center: The On-site Concentration of Dajin Resources
Gaining the Upper Hand through Hometown-Based Economic Networks
The Mutual Activation of Rural Social Resources and Tongxiang Tongye Economy
A Countermovement against the “Hollowing-Out” of Rural China

Sociologists and anthropologists, and all others interested in folk religions and concerned with contemporary Chinese society and culture.