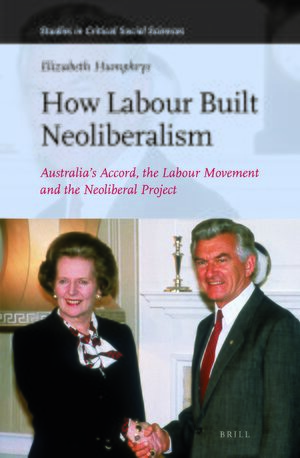 Author: Elizabeth Humphrys
Why do we always assume it was the New Right that was at the centre of constructing neoliberalism? How might corporatism have advanced neoliberalism? And, more controversially, were the trade unions only victims of neoliberal change, or did they play a more contradictory role? In How Labour Built Neoliberalism, Elizabeth Humphrys examines the role of the Labor Party and trade unions in constructing neoliberalism in Australia, and the implications of this for understanding neoliberalism’s global advance. These questions are central to understanding the present condition of the labour movement and its prospects for the future.
E-Book (PDF)

€135.00$163.00
​
Add to Cart
Elizabeth Humphrys is a political economist at the University of Technology Sydney. She has published on trade union and social movement responses to crisis, including in Globalizations and Critical Sociology. She completed her Ph.D. (2016) at the University of Sydney.
“In pointing out some of the unique characteristics of neoliberalism’s triumph in Australia, Humphrys enriches our understanding of the different pathways and contexts, including the incorporation of the labour movement, that can bring about such dramatic economic and social transformation in the interests of capital without massive social unrest.” – Sarah Gregson, Labour History 118 (May 2020)
“ How Labor Built Neoliberalism is a scholarly, erudite and persuasive account of Labor’s neoliberal turn and of the Accords. It should be widely read by labour historians, political economists, unionists and Labor politicians.” – Tim Lyons, in: Labour History 118 (May 2020)
"[Humphrys'] critique offers both useful conceptual tools for understanding neoliberalism and an important caution in rushing towards the state for solutions. That is a challenge, particularly in Australia, where unions have often looked to political means to solve industrial problems. Her call also resonates with a growing number of critical voices within the union movement urging a renewed focus on industrial organising." — Ben Spies-Butcher, Macquarie University, in: The Economic and Labour Relations Review (2020)
" How Labour Built Neoliberalism is an important contribution to the critical study of a period of history that has largely escaped honest appraisal. It builds on the work of Tom Bramble, Rick Kuhn and others, joining a small but important offering of literature that frankly explains the genesis of the unions’ current crisis. [...] How Labour Built Neoliberalism is critical reading for anyone who wants to understand the context of today’s trade union crisis." — Steph Price, in: Marxist Left Review, Issue 18, Winter 2019
"[F]ind yourself a copy of How Labour Built Neoliberalism... [Humphrys] makes a serious, well-researched and persuasive case, which challenges a great deal that’s been written about the recent past. If you’re at all concerned about the state of the Australian left, you need to engage with her work." — Jeff Sparrow, in: Sydney Review of Books, 23 September 2019
"The book opens up a discussion about the contemporary ‘profound disorganisation of trade unions’ not with the end of lamenting that which has been lost but as the starting point for how workers can win back control over their lives. [...] How Labour Built Neoliberalism points to the dead-end that is resolving a crisis of capitalism on capitalist terms. This is the strategic value Humphrys’ work brings to the present predicament of the labour movement." — Godfrey Moase, in: Overland, 1 April 2019
"[…] I wish to pay a huge tribute to Liz Humphrys for her book How Labour Built Neoliberalism. This publication is hugely significant. I feel we have waited 30 years for this analysis." – Lee Rhiannon, in: Progress in Political Economy, 24 March 2019
"[...] Elizabeth Humphrys challenges the narrative that neo-liberalism was generally imposed onto labour by right-wing governments such as the Thatcher government in the UK and the Reagan government in the US during the 1980s. Through a detailed analysis of the Australian political economy between 1983 and 1996, she demonstrates how restructuring was also carried out by a Labour Party in close co-operation with trade unions. [...] Written in a beautiful and highly accessible prose, she makes clear that trade unions are not automatically progressive or reactionary. Ultimately, trade unions too are sites of class struggle, which decides on whether a particular trade union is a force for social justice or not. [...] Humphrys’ book is a must-read in guiding our explorations of this question and the search for alternative, progressive strategies." — Andreas Bieler, Professor of Political Economy, University of Nottingham, UK, in: Progress in Political Economy, 14 January 2019
"This book offers a groundbreaking account of the transition to neoliberalism in Australia, focusing on the role of the Labor Party and the trade unions in the economic, social and policy shifts involved in that transition. The book is scholarly and informative, and it sets the standard for studies of neoliberal transitions elsewhere. This is essential reading for anyone wishing to understand the emergence of neoliberalism in Australia, or the contradictory role trade unions can play during an economic crisis." — Alfredo Saad Filho, King's College London
"Humphry’s brilliant How Labour Built Neoliberalism utterly transforms our understanding of modern Australian politics and compels us to rethink established ideas about the role of the trade union movement in the making of neoliberalism. I consider this to be a landmark work in Australian political sociology and an invaluable contribution to the literature on global neoliberalism." — Melinda Cooper, University of Sydney, Author of Family Values: Between Neoliberalism and the New Social Conservatism (Zone Books, 2017)
Acknowledgements
List of Illustrations
List of Abbreviations