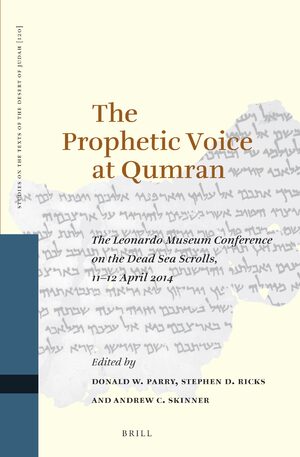 The Prophetic Voice at Qumran

The Leonardo Museum Conference on the Dead Sea Scrolls, 11–12 April 2014

Editors: Donald W. Parry, Stephen D. Ricks, and Andrew C. Skinner
Contrary to the generally held view, the Second Temple Era was not a time of prophetic dormancy, but of genuine activity, though of a different character than that of the pre-exilic age. The conference on The Prophetic Voice at Qumran, held 11–12 April 2014 at the Leonardo Museum in Salt Lake City, provided a venue for lively discussions of many of the issues connected with the question of prophecy and prophetic writings in the Dead Sea Scrolls and Second Temple texts. Three of the scholars—Emanuel Tov, Eugene Ulrich, and James C. VanderKam—were featured as keynote speakers, and an even dozen scholars made presentations at the conference, of which nine are published in the present volume.

€105.00$121.00
​
Add to Cart
Donald W. Parry, Ph.D., Professor of Hebrew Bible, holds the Abraham O. Smoot Professorship at Brigham Young University. He served as an editor of Discoveries in the Judaean Desert XVII and has authored or (co)edited a number of articles and books on the Scrolls and the Hebrew Bible.

Andrew C. Skinner, Ph.D., is a Professor of Ancient Scripture and Near Eastern Studies at Brigham Young University; he has served as an editor of Discoveries in the Judaean Desert XXXIII and has authored numerous books and articleson the Scrolls and other religious and historical topics.