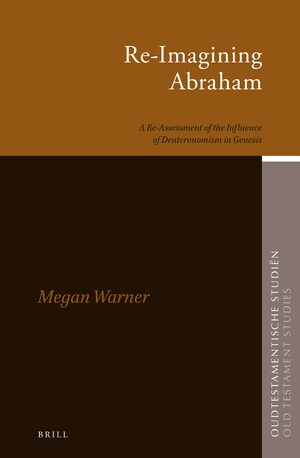 A Re-Assessment of the Influence of Deuteronomism in Genesis

Author: Megan Warner
In Re-Imagining Abraham: A Re-Assessment of the Influence of Deuteronomism in Genesis Megan Warner revisits the tradition that Genesis was edited by editors sympathetic to the theology of the Deuteronomist. On the basis of close, contextual readings of the four passages most commonly attributed to (semi-)Deuteronomistic hands, Warner argues that editorial use of Deuteronomistic language and themes points not to a sympathy with Deuteronomistic theology but rather to a sustained project to review and even subvert that theology. Warner’s ‘re-imagining’ of Abraham demonstrates how Israel’s forebear was ‘re-imagined’ in the post-exilic context for the purpose of offering the returning exiles a way forward at a time when all the old certainties, and even continued relationship with Yahweh, seemed lost.
E-Book

€110.00$127.00
​
Add to Cart
Megan Warner, DTheol (2012), University of Divinity (Melbourne), is Teaching Fellow at King’s College London. She has published widely on Genesis and the Pentateuch and is the author of Abraham: A journey through Lent (SPCK, 2015).
"Warner's Monographie nimmt einen festen Platz in der Landschaft der Genesis-Forschung ein." - Urmas Nommick, in: Theologische Literaturzeitung, 2019
Foreword by Mark G. Brett
Acknowledgements
List of Tables

3 The Heir in Danger
Genesis 20 Ironies, Half-Truths and Flawed Assumptions
Gen 21:1–7 The Birth of Isaac
Gen 21:8–12 The Expulsion of Hagar and Ishmael
Gen 21:22–34 Abimelech and Abraham Exchange Oaths
Gen 22:1–14 The Binding of Isaac
Gen 22:15–18 The Late Addition
Gen 22:19 So Abraham Returned to His Young Men …
Reading in Context
Final Observations

4 Righteousness and Justice
Gen 18:1–16 The Visitors
Gen 18:17–19 The Additional Passage
Gen 18:20–22 ‘I Must Go Down and See’
Genesis 19 Lot’s Hospitality and the Destruction of Sodom and Gomorrah
Gen 18:23–33 Then Abraham Came Near
Reading in Context
Final Observations

Select Bibliography
Index of Ancient Sources
Institutes, academic libraries, post-graduate students, practitioners and all those interested in Genesis and the Pentateuch, biblical interpretation and the history of Ancient Israel.