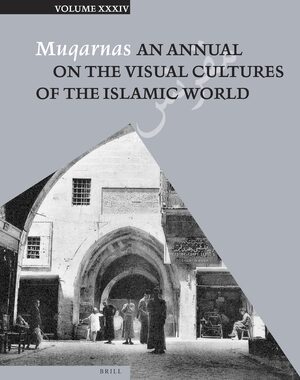 Editors: Gülru Necipoğlu and Maria J. Metzler
Muqarnas 34 features articles ranging from monumental architecture in seventh-century Jerusalem to modern Arab painting in Syria. It includes an archaeological study of the Agdal in Marrakesh, one of the few surviving medieval Islamic estates; as well as a fresh assessment of Ilkhanid polychrome stucco decoration in the Pir-i Bakran mausoleum. The volume contains several articles on interactions between Islamic and Christian societies as attested in architectural landscapes from the early modern period. One piece interprets an inscribed Renaissance gate at a Crimean palace; another provides a fascinating micro-history of Venetian merchants in Aleppo, who lived in commercial khans. Other highlights include an article exploring the impact of Shirazi poets and their tombs on the famous traveler, Pietro della Valle; and an investigation of the forgotten Galata New Mosque in Istanbul, built by the queen mother in 1698 to replace a prominent Catholic convent church following Ottoman military defeats.

The Notes and Sources section introduces several new texts, including a Neo-Latin poem that challenges recent modifications to the Alhambra’s iconic Fountain of Lions, and a hitherto undeciphered Persian chronogram poem, which sheds valuable light on the production sites of luster-painted ceramics in the Safavid period. Also featured is a sixteenth-century Arabic chronicle describing Ottoman construction projects in Mecca within the context of diplomatic relations between Istanbul and Gujarat.

€59.00$71.00
Hardback
Add to Cart
Gülru Necipoğlu, (Ph.D., Harvard University, 1986) is the Aga Khan Professor of Islamic Art and Architecture at Harvard University. She has been the editor of Muqarnas since 1993.