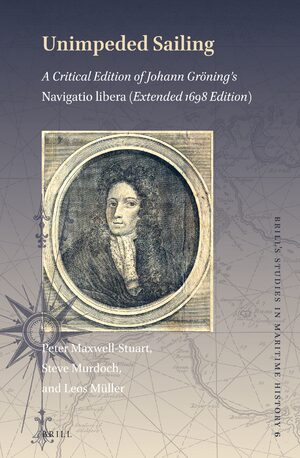 Authors: Peter Maxwell-Stuart, Steve Murdoch and Leos Müller
The original Latin text of Johann Gröning’s Navigatio libera has never before been translated into any modern vernacular language. Gröning’s intention was to set out the position of neutral nations (in this case the Danes and Swedes), and their right to pursue trade during the wars of the great maritime powers (particularly the English and the Dutch). It specifically sought to engage with and refute the work of Hugo Grotius while taking cognisance of the critique of Gröning’s work by Samuel Pufendorf. The text serves as a bridge between 17th-century polemical discourse surrounding the ‘free sea’ versus ‘enclosed sea’ debate and later 18th-century legal literature on the rights of neutrals and the continuation of free trade in time of war.
E-Book (PDF)

€95.00$115.00
​
Add to Cart
Peter Maxwell-Stuart, Ph.D. (1994) is Reader in History at the University of St Andrews. He is widely published in the fields of Greek and Latin literature and history, and in the occult sciences of Mediaeval and early modern Europe. He is about to publish a translation of Gomez Pereira’s scientific treatise, Antoniana Margarita, and Martin Delrio’s chef d’oeuvre, Disquisitiones Magicae.

Steve Murdoch, Ph.D. (1998) is Professor of History at the University of St Andrews. His major monographs include; Network North: Scottish Kin, Cultural and Covert Associations in Northern Europe, 1603-1746 (Brill, 2006) and most recently with Alexia Grosjean, Alexander Leslie and the Scottish Generals of the Thirty Years’ War, 1618-1648 (Pickering & Chatto, 2014). Among maritime scholars he is best known for his award winning monograph The Terror of the Seas? Scottish Maritime Warfare, 1513-1713 (Brill, 2010).