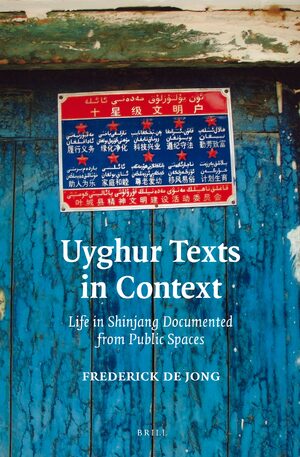 Author: Frederick de Jong
The current volume presents a selection of 126 texts in Uyghur posted in public spaces, translated, and annotated for this book. The author started photographing Uyghur texts in 2008 at the time of the Beijing olympics and continued to do so during 2009, the year of the so-called “Urumqi uprising” of July 5. This event generated a stream of texts posted in public spaces that reflected the efforts made by the authorities to re-establish control. In the course of his travels in the years thereafter the author continued to add to the corpus of photographed Uyghur texts. At the same time he started collecting, as comprehensively as possible, various types of folders, brochures, handouts, and product wrappings with texts illustrating aspects of Uyghur culture and society. The texts, published here for the first time, are primary source materials documenting a wide variety of aspects of daily life of the Uyghurs in Shinjang. The implicit messages or explicit references contained in many of these texts give them significance as clues towards an understanding of the existential realities they reflect or illustrate.
E-Book (PDF)

€116.00$134.00
​
Add to Cart
Frederick de Jong, University of Utrecht, is the author of A Grammar of Modern Uyghur, 2007.
"De Jong’s contribution promises to substantially widen scholars’ understanding of what public texts can tell us about life in Xinjiang. [...] DeJong’s crucial insight—that a massive archive of state control of its minority subjects has been hiding in plain sight—will provide indispensable documentation of the policies that led to the tragedies of the present."
Rian Thum in The Journal of Asian Studies 78/1 (Feb. 2019), 169-170.
All interested in the history, language, religion and culture of the Uyghurs in Shinjang, minorities in China, and the Turkic peoples of Central Asia.